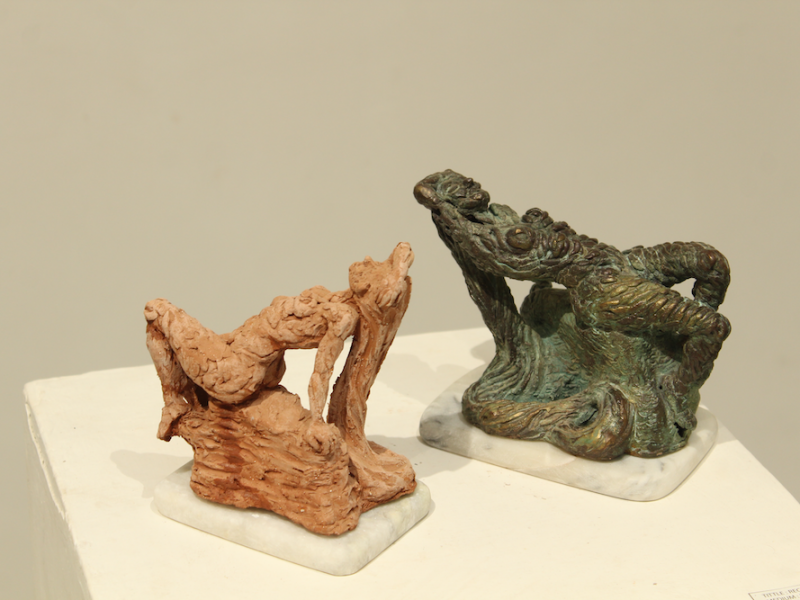 What is it to be human? There are so many layers to the world we live in, and our experiences of them, given that there can be multiple meanings attributed to the same thing. All of us have our own unique personal lives, with their intricacies and oddities. No two people live the same life even if they go through the same life events. And yet, there is something that binds all of us together. There is a universality to the emotions we all feel, which allows us to be empathetic.

The body can be such an expressive form – from just fingers and hands, as is seen in the works of sculptor Auguste Rodin to realistic depictions by the renowned Michelangelo, to the vigour and spirituality of the well-rounded forms in Ajanta and Ellora caves’ mural rock carvings and sculptor and painter Alberto Giacometti’s spindly, stick-like figures that depict complicated ideas such as Existentialism. From being a medium to depict sexuality, death and decay, to violence as well as serenity, the body as a subject is very versatile and has been used extensively by artists for aeons.

I think, in art appreciation, whatever the expression of it, our faculty of empathy is of utmost importance in order to understand something that we have not gone through, but we can somehow imagine and undergo mentally. How do we do this? How do we feel pain while watching a movie, or have anger and frustration rise in our chest when we perceive an injustice being committed to a character we fully well know is not real, such as for the tragic love of Shakespeare’s Romeo and Juliet or the melancholy and existential dread for Hamlet?

My work seeks to portray such universal feelings. Feelings that transcend simple emotions which can be depicted through a smile, frown or tears. The body is an extraordinarily expressive medium which can be used to depict such emotions. I started out with certain easily understandable postures, such as the foetal position. None of us have actual memories of the time we were foetuses but the pose continues to be the most comforting and frequently resorted to in times of stress or despair. Through multiple maquettes, I finally came across (since I myself did not know what the result of the form or figure would be) the Reclining Lady. She represents confident femininity and vulnerability. The feeling one has after taking a bath and sitting in the nude, drying oneself in unabashed nakedness. The confidence one has when alone in a room, with no one who might judge them. Experiencing the relaxing pull as one stretches their muscles and basks in the warmth of drying up. Something like that experience, and something beyond that. Reclining Lady depicts a very intimate moment, personal and private, but also universal to everyone. It was transferred later from the initial spontaneous terracotta version to the direct metal (dokra) one. I later composed them together and am amazed at how the difference in each medium gives  off a different vibe entirely. 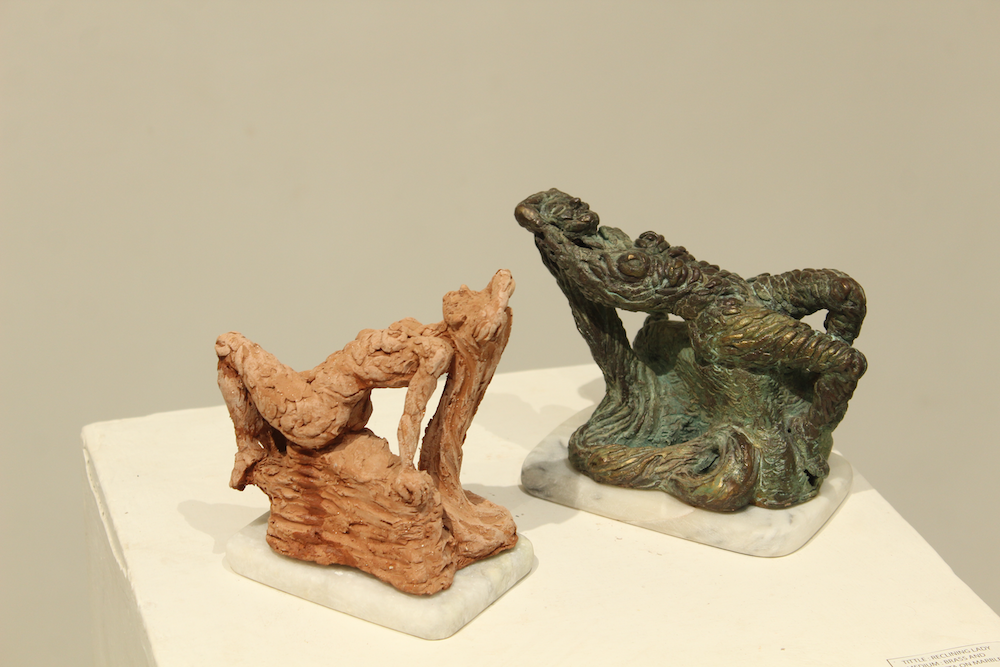 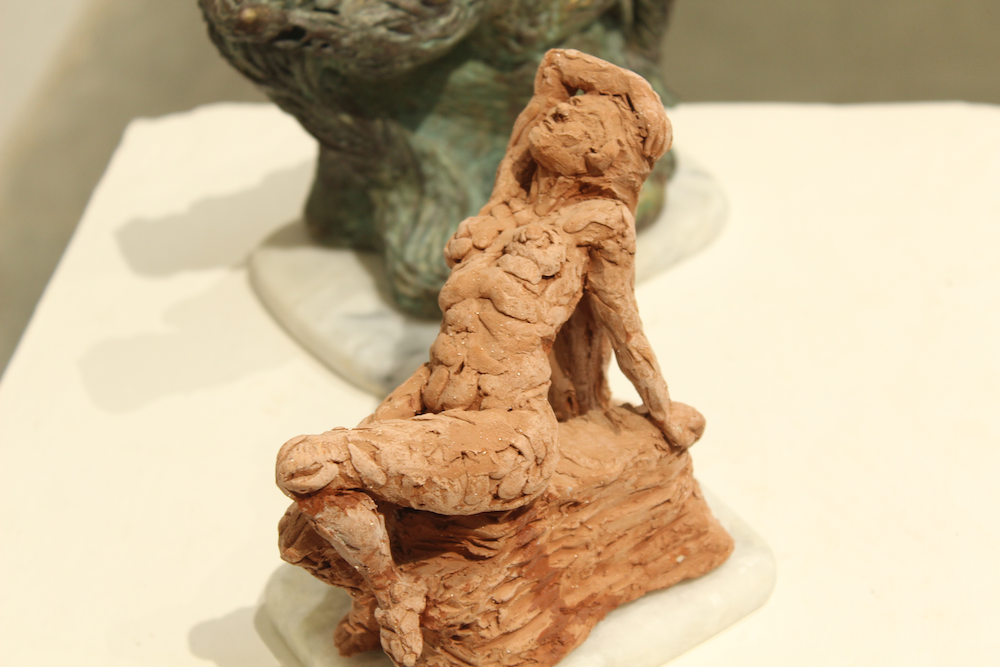 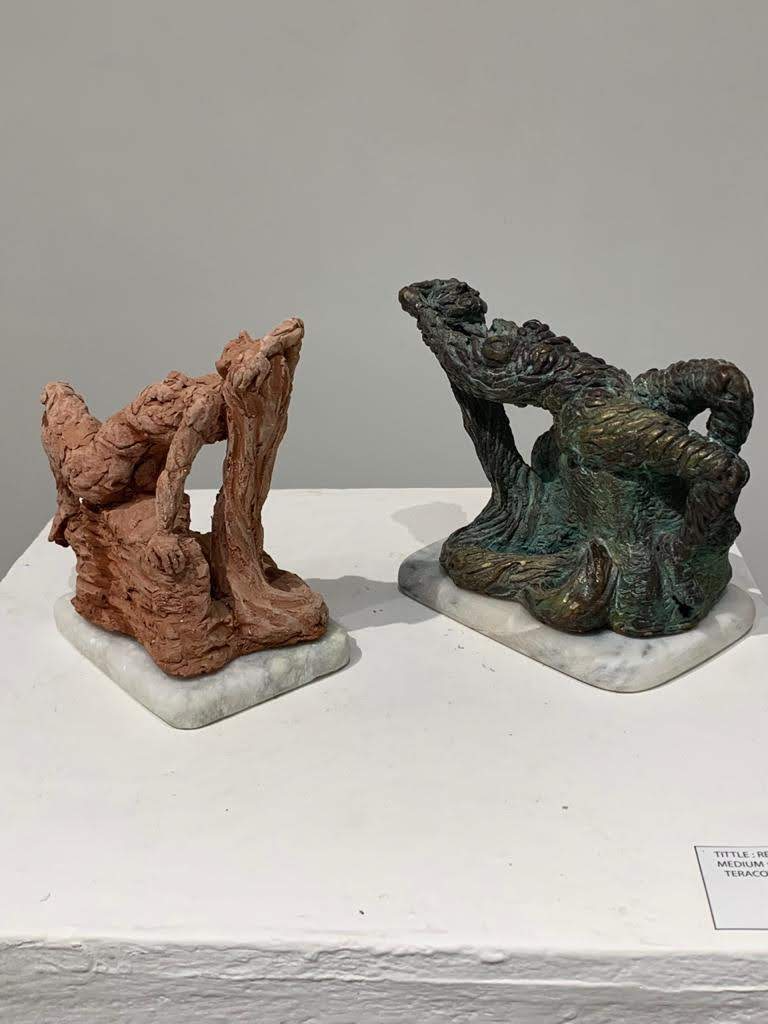 I prefer working with patches that present the body in swirling patterns, which have been compared, by some artists I know, to impressionistic brushstrokes. The body is then no longer soft, fleshy, and natural but rather a coarse idea of it. Something ephemeral, smoky, that could disintegrate and disappear as fast as it was joined to offer only a glimpse of itself. The myriad of ideas one can come up with whilst working with the figurative narrative is endless. It is impressive to see how the body can be used to depict so many and such polar ideas. Objects are usually assigned as symbols of other things, but the body can be interpreted as per one’s will. It can be distorted, disassembled, decayed, diabolic, damaged, mutated, or even mutilated in form, in order to get across what the artist wishes to express.

It is funny how vulnerability is considered the antonym of safe or secure. Humans are not fortresses that need to have impregnable walls in order to have security. Vulnerability in humans is the ability to fully be oneself, unafraid and confident. The ability to love oneself along with one’s flaws too, while acknowledging and working on them. To be able to stand up for one’s values and ideals even if they are unpopular opinions, to be able to voice one’s self even if one falters and fails. In a world that tries to create high standards based on superficiality, staying true to oneself is what makes one the most vulnerable, and the most courageous, thereby translating to true strength.

Noella Fernandes is currently a student pursuing her Bachelors in Visual Arts from the Maharaja Sayajirao University of Baroda. Her works contemplate the ideas and concepts that revolve around human existence and emotions. She also likes to travel, read and write in her free time. You may reach her via e-mail at noellafernandesart@gmail.com