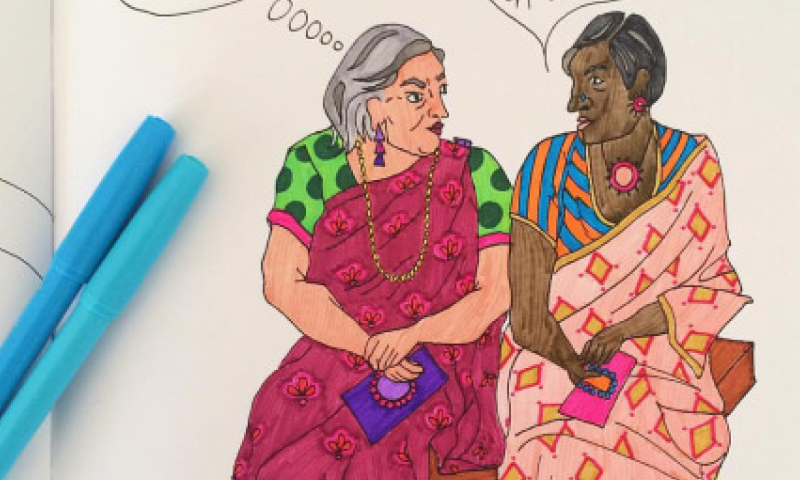 I went to a five-year old’s birthday party recently. As an adult who could see the mother profusely sweating through the party, I decided to help out. As the kids sat down to eat, I served them Chole Puri and waited on them. I was making small talk with some of the 11-year olds when a five-year old shouted, “Aunty, I want another Puri.” I served the kid and was checking if anyone else needed anything. That’s when one of the 11-year old replied to the child, “She is not Aunty, okay. She is Didi.” This girl thought that there was something wrong with addressing a younger woman as ‘Aunty‘ and made all efforts to make sure it doesn’t happen. I didn’t know what to say to this 11-year old girl.

Young women, especially unmarried ones, either do not want to associate with the term or are expected to steer clear of it. In the Indian imagination, an ‘Aunty’ is a middle-aged, usually fat woman who is married and has children. I am fat and look older than my actual age of 22. I, even though unmarried and childless, am considerably older than the 10 and 11-year olds the five-year old addressed as Didi; so I couldn’t be a part of that group and hence the child, within his faculties, clubbed in the group of the people he calls ‘Aunty’. Makes sense.

But then why was the five-year old ‘corrected’? Why was ‘Aunty’ not an acceptable term for me?

The issue with the ‘Aunty’ body arises from a deeply misogynistic and dehumanising understanding of women. In this imagination the woman, whom the world now addresses as ‘Aunty’, has basically served her purpose of marriage and child bearing, and is hence rendered useless. Every other faculty of a woman is deemed irrelevant. The postpartum body is considered unattractive and thus, useless in the patriarchal society. The ‘Aunty’ imagination reinforces the dehumanisation of women – reducing a woman to a conventionally understood attractiveness.

The ‘Aunty’ categorisation doesn’t stay limited to the body though. It spreads over to clothes, shoes, hair clips and every other category of women’s styling. If a younger woman chooses to adorn any of these styles, there is a fair chance that she would be shamed for dressing like an ‘Aunty’ – which is of course, an established stereotype in India. Thanks to the content on Indian television and our multiple film industries. Well, may I also add Netflix to the list with its Never Have I Ever portraying a similar depiction of ‘Aunties’ on the show.

I would have been happy to conclude it here but the ‘Aunty’ image transcends the mind-body duality. All of the ‘Aunties’ also think a certain way. In films and TV, she is superficial, narrow-minded and meddles in other people’s business way too much. There is a good chance that if a writer wants to include a character with the aforementioned traits, it would almost always be an ‘Aunty’. All of it points to our misogynistic understanding of middle-aged, married women with children. The prevalence of such character in our movies and TV series tells us that even in the age of progressive feminist movements, we find it difficult to shake off our dehumanising understanding of women.

In this case, the ‘Aunty’ body is objectified, sexualised and fetishised in every way possible. The woman is ripped off the autonomy over her own body and is used for the sole purpose of sexual gratification. There is no person left in such an imagination of the middle-aged female body. And again, one thanks the portrayal like that of Aunt May from Spiderman Homecoming – the sexualisation of ‘Aunties’ is reinforced.

Also read: On Aunty Shaming And Why It Matters To Feminism

Given the patriarchy we live in, it sounds almost ambitious but guess what? Womxn are full persons – all womxn; and they deserve to be treated with respect and dignity – as is the right of every human being.

Anmol is a freelance writer with a postgraduate degree in Communication from the University of Hyderabad. She can be reached at nayak.anmol7@gmail.com. You can find her on Instagram and Twitter.