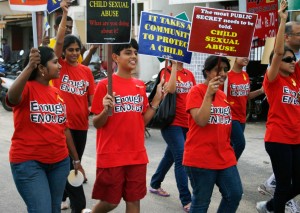 On Jan 1, 2014 when I met Vidya Reddy, one of TULIR’s co-founders, for an interview on consent among teenagers between 16 and 18, I had no doubt that she was going to flesh out the nuances and talk openly about a topic that makes most people cringe. Vidya has a background in psychology and education, and has worked with issues related to children for most of her life. We had a rich conversation on sexual violence, sexualities, exploration and the age of consent, all of which would not fit into one interview. So here is the first part: Vidya Reddy on the age of consent.

1. So, let’s talk a little bit about TULIR? How did you decide to start TULIR?

TULIR started with no fancy notion that we are out to save the world or that we are doing anything noble. I used to volunteer on a helpline for children – the presentation of the case would be something else, and then when you talk (to the child) you’d find a history of sexual violence that was not being addressed. People were uncomfortable addressing it, or did not know how to address it. At that time I also met the other three co-founders, who were just out of college and who because of their thesis or field placement were working on CSA – child sexual abuse. We just started our own organization, because we found common ground.

2. Let’s start with something really basic. Who is a child?

Legally speaking if you are looking at sexual violence, which is what we work on, a child is defined as a person upto 18 years of age, either boy or girl. But in India we have a great number of anomalies in our law. The Juvenile Justice Act 2000 says a child is up to 18 and cannot be working. But the section on aggravated sexual violence in the Protection of Children from Sexual Offences (POCSO) Act 2012 mentions ’employer’, (meaning the child could be employed). We have a law that says a child up to 14 cannot do hazardous work. But there’s nothing on the nature of the profession they can do  from 15 to 18.

If you look at the Right to Education Act 2009 says child up to 14, but in the Prohibition of Child Marriage Act 2006 you have 18 for a girl. But then you have close to 50% of young women getting married below 18. If you look at the POCSO Act it’s 18, but the recent IPC amendment says that if a woman is over 15 and she was raped by her husband it is not really rape. So there are contradictions there.

3. What about older children and the age of consent – what does the law say and how does this actually work?
In India the age under which any sexual activity is considered criminal has been raised to 18. I think we need to be reasonable and take it on a case by case basis. I know 14 year olds who are more mature than 40-year olds but we need to draw the line somewhere. So, I draw the line at 16 for boys as well as for girls to leave some room for exploration. Some countries say 14, but I would leave it at 16.

There’s something else. When you say 16, people imagine that you are saying go there and let it all hang out at 16. No, I think when you start having sexual intimacy you must be in a position to take responsibility for that intimacy, but at 16 with your hormones raging, you live in a sexualized world, and then they say, ‘Sorry folks, you cannot do anything until you are 18!’ It’s not going to work.

4. So, currently child sexual abuse would be sexual abuse against boys and girls under the age of 18?
I would like to look at it as sexual violence really, which is involving a child in some kind of sexual activity. This could be touching acts or non-touching acts. That ranges from sexualized comments, looking at the child in a sexualized way, taking sexualized pictures of the child, showing the child sexualized content, to actual acts of touching, like fondling, to caressing to actual intercourse with a child, oral sex, masturbation. I would like to describe sexual activity as the entire gamut of adult foreplay along with some kind of penetration if it comes to it.

5. POCSO has introduced a broader framework for working with sexual violence against children, perhaps. Let’s talk a bit about POCSO.

An act of sexual violence is just an act, until you look at the context: someone from the family, some one from the educational institution where the child is studying, if the child is physically or mentally disabled. What is really important about POCSO is that it takes into account the context. It looks at about 21 different contexts.

POCSO also does not just look at peno-vaginal penetration – it looks at varied forms of penetration, finger, other body parts,and objects, all of which are common in child sexual abuse. It also gives us a greater bandwidth if a child and family decide to take a case to court.

For example, in 2008 we had a case in which the child said that her father would lick her all over her body and in those things the only sections we could look at were S. 23 in the Juvenile Justice Act 2000 which is cruelty, or S. 354 in the IPC which is outraging the modesty of a woman, which is like a slap on the wrist. POCSO looks at non-penetrative, but physical acts and it becomes more aggravated if it is a family member. In this case he would have got 7 years, whereas under S. 354 it would have been just a year and a fine. So it has given us the confidence to encourage people to report. I won’t say that the system is enabling when you report, but it helps us hold abusers accountable and ensures that more children won’t be abused again by the same person.

6. What do you think about teenagers’ right to consent and when does this apply?

What is consent in general when child marriage is not considered a big issue, but people have a problem with 17 year olds who run away with each other? I heard of a case in Delhi. A 17-year old girl ran away with a 17-year old boy. Here it boils down to who ran faster to the police station and filed a case. Anyway the boy was arrested on charges of rape. The girl came to the court and said, ‘There was no rape. I consensually had sex with him’. So here you have a case where a victim is implicating herself. So there are two accused and a non-existent victim. What does that say about our idea of consent!?

Then there is child marriage, and a law that says it’s not rape if the girl is above 15 when her husband has sex with her. Under POCSO child marriage could be an act of violence, but if we marry POCSO to the Prohibition of Child Marriage Act 2006 are we going to prosecute every fellow who is married to someone under 18?

And then, there is the mindset that your virginity is familial property. During the tsunami there was a spike in child marriages, because families in the camps felt unsafe and were afraid for the security of the child. So they thought it’s best she’s married off to some fellow. So what is consent here?

And take children on the streets, where barter sex is involved. You need a place to sleep, then you have to do a sexual favour. These people asking for sex are also kids. Is that abuse? And if that is not, was that consent?

Besides kids, you have adults who can’t really decide what consent is. Can a wife refuse to have sex with her husband? Is marital rape recognized? Consent is really still a very abstract idea even among adults. So, when it comes to teenagers what can be considered consent?

That’s really interesting: on the one hand there is a 17-year old girl who implicated herself in a case of rape by acknowledging her desire for her 17-year old boyfriend, and on the other you have a young girl being forced into a marriage and into adult sexual behavior? So, it seems to me almost as if consent according to the law was violated on both counts.