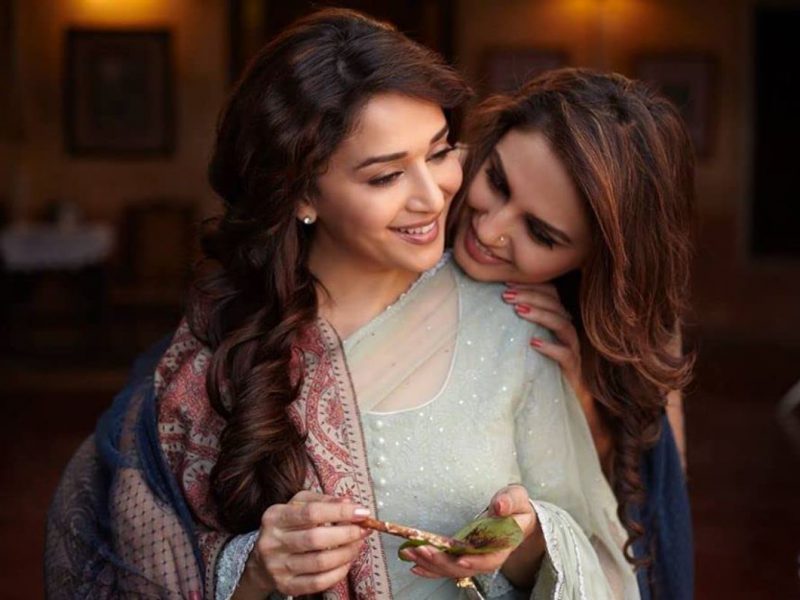 A thread that connects the two Ishqiya films – Ishqiya (2010) and Dedh Ishqiya (2014) – is that nothing is what it seems, neither the narrative and nor, especially, the women. The 2014 dark comedy film, directed by Abhishek Chaubey, is the second instalment that features the two happy-go-lucky thieves, Babban (Arshad Warsi) and Khalujaan (Naseeruddin Shah). This time around, they are entangled in the story and lives of Begum Para (Madhuri Dixit-Nene), the queen of the princely state of Majidabad and Khalujaan’s childhood sweetheart, and her companion Muniya (Huma Qureshi). One thing that the film never misses a beat in is its craft. Abhishek Chaubey seamlessly blends the outer, glittery world of romantic Urdu poetry and mushairas (poetry gatherings) and the darker goings-on behind this annual poetry festival organized by Begum Para in the memory of her late husband, the Nawab of Majidabad, whose dying wish was that the begum get married again, but only to a poet. Hence, the annual mushaira also served the function of a swayamvar, a ceremony in which the woman picks her husband from a group of suitors. The film has all the makings and trimmings of a commercial thriller – a dynamic story, song and dance, an action-packed climax – and at the same time, it is a cinephile’s film. From references to the works of Bashir Badr and Ismat Chughtai to the script of the film itself being a work of art vis-à-vis both dialogue and story, Dedh Ishqiya satisfied both the commercial-Bollywood-movie aficionado and the amateur film reviewer/critic in me.

Movement, in its several different meanings, is a dominant idea in the film. The first (and quite literal) example is that of dance. Begum Para was a Kathak dancer when she was young, an activity she retired from presumably after her troubled marriage with the now-deceased Nawab of Majidabad. Khalujaan’s insistence on her taking it up again functions as a plot point – during the dance sequence to the song Jagaave Saari Raina, the audience sees Begum Para dancing in a closed room with Khalujaan, who is one of her suitors, spying on her through the window, the scene interspersed with the flashbacks of a much younger duo in much the same situation. This movement, both of dance and through time, lulls the audience into a false sense of familiar comfort – the hero has successfully wooed the heroine, and Khalujaan’s long-lost love will now finally find fulfilment. Chaubey will go on to systematically break down and dispel these delusions, both of the audience and of Khalujaan. A second, and again literal, example is that of the heavy-handed usage of transportation; roads, highways, scooters, cars, trains and railway platforms are recurring images in the narrative of the film. There is constant physical movement of characters from one place to the other. In an interesting contrast, certain prolonged scenes show a static frame with the character(s) driving or running off into the distance, on a road going right through the centre of the frame, most notably Muniya and Begum Para towards the end of the film. This running off, this escape, is integral to the freedom of the two women and for them to be able to live their sexualities.

One of the central motifs of the film is the idea of the chase. While it is no surprise that a film featuring two thieves would, by default, include police-chase sequences, the idea goes beyond that. The overarching plotline of the Ishqiya franchise entails a vicious cycle of Babban and Khalujaan running from and being caught by Mushtaq Bhai, the mafia lord they work for. Then there is the pursuit of the women in the film – a congregation of poets flocks to the begum’s palace annually to try and win her hand in marriage even as she refuses to pick a husband every year, and Babban and Khalujaan respectively pursue Muniya and Begum Para. The male characters in the film seem to glorify the idea of the chase, attaching a certain desirable masculinity to it – the idea of masculinity is further enforced in the film’s narrative by the fact that the former sort of chase is premised on mafia violence and the latter, on romantic poetry, both of which are overtly male-occupied domains. Mushtaq Bhai, upon being asked by one of his lackeys why he lets Babban go each time, says, “Have you heard of Batman? If there’s no Robin, what will Batman do? Sit at home and knead dough.” Babban and Khalujaan are in the throes of (supposed) love, talking of moving through its seven stages in giddy, alcohol-sodden reveries, blissfully unaware that neither woman shares a fraction of the emotion that the duo has deluded themselves into feeling. When this plot-thread unravels, quite explosively so, Muniya (in a beautifully subversive way) rebukes Babban, “This is the problem with guys like you. You cannot differentiate between love and sex.”

The principal subversion, one that undercuts the whole guns-and-roses world occupied and run by men, is the relationship between the two women and the plan they concoct to attain their freedom. Their plan uses the men (and their money) as mere means to achieving the desired end. Babban, Khalujaan, Jaan Mohammad – all principal characters with considerable agency – get comically utilized and manipulated by Muniya and Begum Para to engineer their escape from the confines of life in the Majidabad Palace. The pinnacle of this subversion is achieved in one of the most pivotal scenes in the film, one that is a heavy-handed hint at the nature of the relationship between the two women. The makers of the film give a delightful nod to Lihaaf, Ismat Chughtai’s trailblazing short story about female sexuality – Muniya and the begum are indulging in giggly, breathless play, tickling each other as their captives Babban and Khalujaan watch, their wrists bound behind them. Khalujaan casually remarks, “Thand lag rahi hai. Lihaaf maang lein?” (“It’s cold down here. Should we ask them for a quilt?”). Muniya and Para lose their balance and fall, their shadows fusing into one – a scene unmistakably evocative of the elephantine shadows that the quilt in Chughtai’s story throws upon the wall, frightening the narrator. The scene in the movie is subtle, masterful – a wide shot captures the diminutive figure of Khalujaan huddled in the centre of the frame, with Muniya and Para’s shadow flickering over his face and the wall behind him. The movement of the silhouette of the entwined women, and the (enforced) stillness of the two men, seals the separation of the two groups without the shadow of a doubt (pun intended).

The movement of the camera in a few scenes is a device excellently utilised by Chaubey to add meaning to his narrative. The camera deliberately focuses on Muniya’s hands massaging Para’s shoulder when the latter lapses into convulsions brought on by extreme anger (another nod to Lihaaf) – a scene that is seemingly innocuous when it first occurs, but is laden with meaning and foreshadowing when viewed in retrospect. In another instance, Babban’s disorientation on hearing Khalujaan’s voice coming from the television is portrayed by keeping the shot unstable – the shaky video with dropped frames almost looks like it’s glitching.

One thing that can be ascertained, in conclusion, is that Dedh Ishqiya is a film that drives itself on movement – the jumps of the plot and characters through time and space, conceptual and stylistic manoeuvres that make it a masterpiece of the black comedy genre, nuanced micro-movements in dialogue and expression, and (quite literally) a fast-paced and action-heavy storyline. However, as much as movement, the absence of it is the driving force which gives certain scenes their meaning, and the movie its comic relief, most notably the two stalemate scenes in which the characters have guns pointed at each other and everyone is refusing to move. The film, at large, shows zero displacement in the characters of the two men – the cat-and-mouse chase between Mushtaq Bhai and the nephew-uncle duo ends in the same place as it (and the film) started, with the latter being surrounded by the former and his gang. The beats on which Khalujaan and Babban operate do not shift throughout the two films of the franchise – the two resourceful thieves are quick to fall in love and quick to jump to conclusions. However, through them, Abhishek Chaubey has engineered dynamic narratives that are anything but stagnant or one-note. At the same time, when it comes to viewing the film from the lens of sexuality, the dominant narrative remains that of Begum Para and Muniya – a delicately woven story of two women fending for themselves in a narrative (and world) populated by men. The fact that Begum Para eschewed all her suitors and her palace and chose to run off with Muniya, whom she calls her “friend, sister, and soulmate”, is an important and commendable plot point to have been added in a mainstream Hindi film – it is a beautifully subtle portrayal of feminism and queer-positivity, the likes of which have seldom appeared again in cinemas.