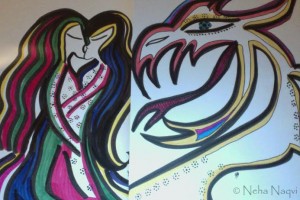 Haiku for the Disenfranchised:

‘377. Unnatural Offences – Whoever voluntarily has carnal intercourse against the order of nature with any man, woman or animal, shall be punished with imprisonment for life, or with imprisonment of either description for a term which may extend to ten years, and shall also be liable to fine. Explanation – Penetration is sufficient to constitute the carnal intercourse necessary to the offence described in this section.’

There will be no making peace with the fact that Justice GS Singhvi and Justice Mukhopadhyay have left a very many Indian citizens in an awful legal bind. To serve such a calculated blow to the morale of a people only recently counted in? To go so far as to pronounce the decision for Suresh Kumar Koushal and another Vs. Naz Foundation and others on the very last day in court for one of the members of the Bench? Genius chess moves – deftly executed. But will those responsible for the verdict be able to sleep at night, knowing they have played a pivotal role in an enormous setback to the fundamental rights of people, across the nation?

In a thinly veiled act of cowardice, 11/12/13 saw the Supreme Court overturning Delhi High Court’s landmark verdict of 2009 that decriminalised homosexual acts among consenting adults in private. The Delhi High Court had both the foresight and the courage to assert the following in 2009 ‘…we declare that Section 377 IPC, insofar as it criminalises consensual sexual acts of adults in private, is violative of Articles 21, 14 and 15 of the Constitution. The provisions of Section 377 IPC will continue to govern non-consensual penile non-vaginal sex and penile non-vaginal sex involving minors. By ‘adult’ we mean everyone who is 18 years of age and above. A person below 18 would be presumed not to be able to consent to a sexual act.’

How does the present Bench’s collective conscience allow the overruling of a judgment that seeks primarily to guarantee citizens the right to exist on fair and equal terms? One that aspires to remedy the fact that so many lived realities have been shrouded in state sponsored denial, violence and neglect?

The essence of the judgment that came of Naz Foundation Vs Government of NTC Delhi in 2009, is captured in the following paragraph ‘…If there is one constitutional tenet that can be said to be [the] underlying theme of the Indian Constitution, it is that of ‘inclusiveness’… This Court believes that [the] Indian Constitution reflects this value deeply ingrained in Indian society, nurtured over several generations. The inclusiveness that Indian society traditionally displayed, literally in every aspect of life, is manifest in recognising a role in society for everyone. Those perceived by the majority as ‘deviants’ or ‘different’ are not on that score excluded or ostracised…Where society can display inclusiveness and understanding, such persons can be assured of a life of dignity and non- discrimination. This was the ‘spirit behind the Resolution’ of which Nehru spoke so passionately. In our view, Indian Constitutional law does not permit the statutory criminal law to be held captive by the popular misconceptions of who the LGBTs are. It cannot be forgotten that discrimination is[the] anti- thesis of equality and that it is the recognition of equality which will foster the dignity of every individual…’

While dealing with the question relating to violation of Article 21 (The Right to Life), the Division Bench of the Delhi High Court outlined ‘…the enlarged scope of the right to life and liberty… also includes right to protection of one’s dignity, autonomy and privacy…’ The Division Bench referred to‘…Indian and foreign judgments, literature and international understanding (Yogyakarta Principles) relating to sexuality as a form of identity and the global trends in the protection of privacy and dignity rights of homosexuals…’

What ‘legal principles’ then, could possibly justify rendering the right to live without fear for loving another person — for living in consonance with the person one is — a crime in 2013? To have squandered the opportunity to banish a draconian law (bequeathed us by our colonial past)is the real crime here, it would seem. The Supreme Court Bench chose misplaced notions of ‘tradition’ and ‘culture’ over equality for every citizen. ‘…Those who indulge in carnal intercourse in the ordinary course and those who indulge in carnal intercourse against the order of nature constitute different classes and the people falling in the later category cannot claim that Section 377 suffers from the vice of arbitrariness and irrational classification…’

Not only did it close the door – it squarely passed the buck. ‘Notwithstanding this verdict, the competent legislature shall be free to consider the desirability and propriety of deleting Section 377 from the statute book or amend it as per the suggestion made by Attorney-General G.E. Vahanvati.’ Can we genuinely expect the parliament to deliver on counts that do not find favour with the Apex Court today? Are we going to rely on the mirage that is ‘separation of powers’ – a perfectly fine idea that often exists intact only in theory? Why have we found ourselves at the mercy of the following stance in 2013 ‘…self restraint has been exercised by the judiciary when dealing with challenges to the constitutionality of laws…’ when 2009 witnessed the progressive ‘…it is true that the courts should ordinarily defer to the wisdom of the legislature while exercising the power of judicial review of legislation. But it is equally well settled that the degree of deference to be given to the legislature is dependent on the subject matter under consideration…When matters of ‘high constitutional importance ‘such as constitutionally entranched human rights – are under consideration, the courts are obliged in discharging their own sovereign jurisdiction, to give considerably less deference to the legislature than would otherwise be the case.’

How does it work, this mechanics of sculpting a collective vision that prefers ‘not to see’? How does one reconcile conflicting constructions of the self, inaccurately made by those occupying the ‘same’ cultural spaces? How long will we continue to do the complexity of our diverse realitiessuch a profound disservice? Do we want scores of innocents continually driven underground, running from the (moral) police, reacquainting themselves with closets they have since outgrown?

How did we go from recognizing that NAZ Foundation’s human rights efforts were ‘…severely impaired by the discriminatory attitudes exhibited by State authorities towards sexual minorities, MSM, lesbians and transgender individuals…’ to a scenario in 2013, where consideration for the human rights of all appears inconsequential?‘…while reading down Section 377 IPC, the Division Bench of the High Court overlooked that a miniscule fraction of the country’s population constitute lesbians, gays, bisexuals or transgenders…’

‘Addressing’ uncomfortable questions around sexual or gender identity by exempting the debate from being allowed to matter does not go unnoticed. The distinct smell of isolation is not lost on an entire people who have in effect been rendered without protection from the law. If the justice system forsakes its citizens, it is a matter of grave concern for all.

The judiciary cannot control what sexual and gender identity means to people individually.  This 2013 verdict not only flies in the face of everything the Delhi High Court fought to constructively confront, it strengthens the rubble from under which hate-mongers and bigots manufacture their ignorant treatment of same sex relationships. It points to a people historically comfortable with multiple shades of ‘in between’ morphing into a lethal mix of revulsion, fear and ‘looking the other way’.

If the judiciary has chosen to gloss overthe devastating implications of such a verdict, it is probably because looking an archaic law in the eye requires both rigour and accountability. It brings with it the responsibility to respond – to act. So long as the spirit of ‘Animal Farm’ has a firm hold on the systems that regulate our lives -‘all animals are equal, but some animals are more equal than others’ – there are bound to be droves of freshly dispossessed people banished to the margins of society, encouraged to live under a rock.

And while we are in the business of calling a spade a spade, our reality is this. The criminalisation of ‘non reproductive sex’ as ‘against the order of nature’ is a disaster waiting to happen as fanaticism peeps through the cracks in our democratic fibre. The legal mechanism has ended up lionizing a regressive law that strips citizens of their basic human rights. A law that has long since been revoked in the country it borrowed from, for being ‘too barbaric’. It has blatantly ignored B.R. Ambedkar’s warning ‘…that it is perfectly possible to pervert the Constitution, without changing its form by merely changing its form of administration and to make it inconsistent and opposed to the spirit of the Constitution.’ It has deliberately strayed from the ‘Objective Resolution’ moved by Pandit Jawaharlal Nehru on December 13, 1946. Nehru where he spoke of resolutions being considered ‘…not in a spirit of narrow legal wording, but rather…the spirit behind that Resolution…’ because ‘…even the magic of words sometimes cannot convey the magic of the human spirit and of a Nation’s passion…’ If legal recourse for those who ‘do not conform’ continues to shrink – there will be palpable anger to contend with, regional and global consequences to be had. The world will be watching very closely in 2014 and more than just a smattering of people are disenchanted with this shockingly regressive, woefully inadequate, dehumanizing stand.

Has been working on human rights, sexuality and gender justice issues for the last eight years. She has a weakness for TARSHI and Alison Bechdel (in equal measure).Is a Bachelor of Laws from the National Academy of Legal Studies and Research and a Master of Laws from Columbia University.