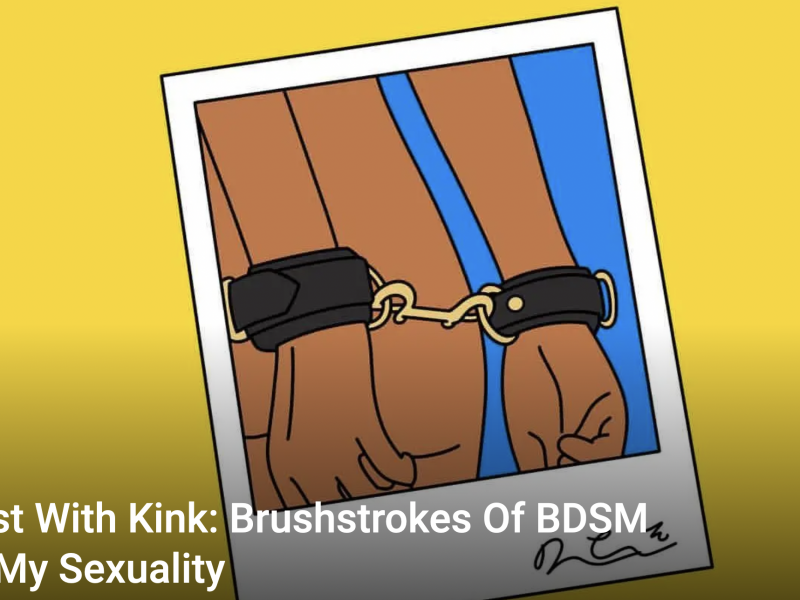 The first time I read 50 Shades of Grey, I puked. It was in a school dormitory. The book was doing its secret tour of various boys’ pillow-undersides, in the cover of night, evading the hawk eyes of the hostel wardens, and it finally came to me. Given that its reputation preceded itself, I hardly cared to read the story and dived right into the middle of a raunchy BDSM sex scene. I was horrified. Till that night, sex, for me was two things – imaginary and vanilla. This was nothing short of utterly radical for my imagination. Repulsed as I was, it also left me intrigued.

Fast forward four years, a bunch of failed attempts at love, a couple of books, and lots of erotica later, my journey with BDSM has taught me so much. It has taught me more about sex, about my own person, being a ‘switch’, and the invincible power of consent. But most importantly the ginormous myths, fallacies and challenges that the total newbie I was, faced with in the process. These myths and fallacies are deeply rooted in our understanding of gender, ourselves, our desire and the very idea of concepts like domination and submission. They are also very tangible, in that, left unaddressed it could cause real harm – mental and physical, to you and your partner(s).

My journey began with a few simple questions. Simple “Why, What, How” stuff.

Why don’t we learn sex?

From very early childhood we begin learning things – how to brush, how to count, how to sing, etc. Of course, most of us have the innate ability to perform the underlying physical and mental effort to do these things. We can move our hands up and down, think numerically and produce sounds. But we are still taught the ways in which our various physical and mental faculties can be applied, and we need it. Why then do we assume that sex is something we could just learn by some kind of osmosis?

Why then do we assume that sex is something we could just learn by some kind of osmosis?

Also read: Children Exploring Their Sexuality Is More Common Than You Might Think

What is domination? It’s like tying up and stuff, right?

Basically, the person who chooses to be submissive holds more power than the one who dominates. The dominating partner (Dom) is given the “Gift of Submission”. Poetic phrase aside, this means that the person who is submissive (Sub) is choosing to “let” the other person dominate. The Sub can, therefore, decide the extent, nature, quality and duration of the act(s) – even end it when and if needs be. Thus by deciding to give up control, you are very much in control.

Additionally, it also means a great deal of responsibility for the Dom. You have to be present and listen to what your partner wants, likes and dislikes – aurally and otherwise. You also need to be aware of what you are capable of and practice and learn. It is a lot of work – stuff that porn glosses over. I remember how I used to spank myself, to understand better how different sides, speeds and the state of my palm (whether cupped, flat, spread or tight) would alter its quality. Or how I tried different knots to see what would not cut off blood circulation. Homework is important. At the very least, and most importantly, listen to what your partner wants likes and dislikes.

Domination is not a mindless infliction of hurt, abuse and pain that your partner(s) did not consent to.

Also, don’t ever feel compelled to dominate or submit because your partner wants you to. There is no shame in saying No.

Is it less “Manly” to be Submissive?

I still remember the night of my submissive sexual awakening. I was pinned up against a mud wall, lifted off my feet and <redacted redacted redacted>. It challenged my fundamental understanding of my own self and what I thought I was. As cis-men, most of us are led to believe that “men always dominate” – sexually and otherwise. If you do not dominate, you are a ‘pussy’. So when I was dominated, by a cis-woman, I felt utterly emasculated – mainly because I loved it. Just as much as I loved to dominate.

It was a great cause of conflict until I learned that I was a ‘switch’ – someone who enjoys both domination and submission. It opened my eyes to the fact that till that encounter I had never even considered that I might enjoy being dominated. Being a cis-male had somehow made it obvious to me that I should only dominate, and would only enjoy that.

The idea of domination is culturally tied to masculinity in so many ways – primarily through the myth that domination is more powerful and denotes machismo.

And no, it doesn’t matter if the sex was non-romantic. Aftercare is important even if you may not care for the person. Basic human decency mandates that you take care of someone you hurt, even if it were consensual and for your mutual pleasure. In feminist terms, it is that equalising act that clearly qualifies the preceding sex act as an agreed upon power play and the partners as being equals, with neither having power over the other that goes beyond the bed.

I am no less a feminist because I enjoy dominating women (as well as men and trans-people) in bed. I am no less a man because I enjoy being submissive in bed. Those are my choices and based out of my desires. Choices and desires that define the sexual acts I engage in, and not me as a person. My sexuality and sexual preferences are a part of me but do not necessarily define me. Further, I feel free to speak about these issues because I come from a family that doesn’t consider sex a taboo – one I can freely ask doubts to and share opinions with. Sadly, the same is not true for the majority of us.

The land that gave the world the Kamasutra claims that talking about sex is against our culture.

So yes, this is also a cry. A cry that echoes and resounds with a fellow writer on this same platform. A cry for a more tolerant India. One where we could openly embrace our various sexual tastes and preferences without fear of judgement. Where we could pull discussions of sex out of the corridors of secrecy and into healthy, safe and equal platforms. One where children don’t grow up learning sex and along with it, misogyny, sexual intolerance, lack of self-esteem and unrealistic expectations from porn. This is a cry for the sunshine of a better, more tolerant, safer and happier tomorrow.