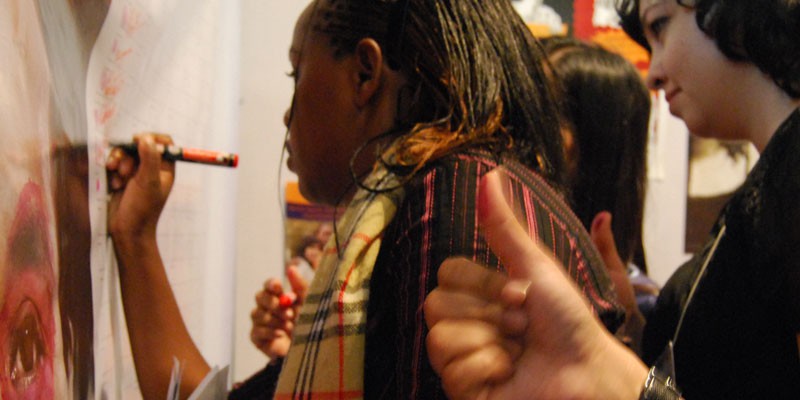 Marevic Parcon or Bing, as she is known, is the Asia Programme Officer for the Women’s Global Network for Reproductive Rights, and has been an activist for women’s right in Asia for two decades. Bing has represented WGNRR in the UN conferences, spoken about SRHR in Asia in several conferences around the world, and worked closely with grassroots organizations. In this interview, Shweta Krishnan asks her about development, the development agenda, and why activists should bother about it. And Bing explains how the new Agenda could lead to stronger activism.

1. As SRHR activists, why should we care about the Post-2015 agenda? How does it help us formulate policy around gender and sexuality?

The Post-2015 agenda is an opportunity for us activists to position gender equality and women’s empowerment within the future framework of development policy and action. It is also an opportunity for us demand political will, commitment and accelerated action from the governments. We shouldn’t just let the governments decide for us for the next 30 years. It has always been said that we need to engage and demand from our governments for us to fully attain our rights; they will never be offered to us on a silver platter. We do this by engaging proactively in the process and by facilitating social mobilization, conducting awareness-raising activities and calling for enhanced and sufficient resources for gender equality, women’s rights and women’s empowerment.

2. What would you say are some of the main concerns that SRHR activists have had with the MDGs. How does the Post-2015 agenda address that?

The MDGs narrowed down women’s health to “maternal health”. With this limited understanding of women’s health, the governments also regressed in commitments made under the ICPD — which defined health and reproductive rights as “a state of complete physical, mental and social well-being and…not merely the absence of disease or infirmity, in all matters relating to the reproductive system and to its functions and processes. Reproductive health therefore implies that people are able to have a satisfying and safe sex life and that they have the capability to reproduce and the freedom to decide if, when and how often to do so.” While it is true that there was significant progress made towards realization of the MDGs, it is saddening that the rights of all women and girls to decide upon all aspects of their sexual and reproductive health and rights have not been ensured. Significant challenges persist, in terms of recognizing sexual rights in addition to the reproductive rights that were not mentioned, and ensuring universal access to contraceptives, safe and legal abortion as well as comprehensive sexuality education for young people among other critical SRHR issues. Not to mention that women and girls are still amongst the poorest and most marginalized and are particularly vulnerable to human rights violations when seeking sexual and reproductive health services.

Under the new global development agenda to be adopted by the UN Member States by the end of this month, commitments to end discrimination and gender-based violence, eliminate child marriage and female genital mutilation, and ensure access to sexual and reproductive health care and women’s and girls’ reproductive rights, among others, were included. These gains were not achieved without the active involvement and participation of the civil society groups that helped in shaping the new agenda. What is needed now is to ensure that these commitments will be acted upon by the governments.

3. Reproductive rights for all is always a huge concern in development agendas. Women’s experiences are very diverse and shaped by other identities like race, class, religion etc. What do we mean then by reproductive rights ‘for all,’ and how do these agendas help in ensuring equitable, sustainable development?

Yes, there is really a need to recognize that women are not just mothers – that we are in fact very diverse. That we are women and girls of all ages and of diverse sexualities; with or without children; women who are single, married or unmarried;  living with or are affected by HIV;  with different abilities and disabilities. We identify as cis-women or trans-women and maybe gender-non-conforming women, etc. Women are of different socioeconomic statuses. In effect, we have multiple and intersecting identities, with diverse health needs over the course of our lives.

When pushing for SRHR for all, we need to recognize the diverse nature of women’s sexual and reproductive health issues, as well as promote, protect, and respect sexual rights and reproductive rights to decide freely upon all aspects of our body, our sexuality and our lives, free from coercion, discrimination and violence.

The Post-2015 development agenda will only be meaningful if it respects the rights of women and girls in all our diversities, and with our meaningful participation in shaping the development framework.

4. Are there gaps in the agenda that could affect SRHR advocacy?

While SR and RR are included under Goal 5.6 of Transforming Our World: The 2030 Agenda for Sustainable Development, the ambitious development for the next 15 years, the document does not still recognize the sexual rights of people of diverse sexual orientation and gender identity and expression.

5. Could you address the issue of religious fundamentalism and how that has affected international processes in the past years, and how SRHR has been affected by this? How do you deal with this in your advocacy efforts?

Religious fundamentalisms play a major role in blocking advanced and progressive language, particularly SRHR language, at international/regional processes. Take for example the debate on abortion. Even after the report of Anand Grover, a UN special rapporteur, declared safe abortion as a human right, abortion continues to be a controversial issue at every UN negotiation. In 2012, the UN Human Rights Council in Geneva passed a resolution endorsing a new set of guidelines on maternal mortality. The resolution endorsed a “technical guidance” paper by the UN High Commissioner for Human Rights that included abortion. The resolution was adopted, but some council members submitted written opposition that was included in the text to the UN General Assembly. In the recent 48th Session of the CPD, the Chair’s text of the draft resolution was withdrawn because of the strong opposition from the African group headed by Nigeria. Nigeria wants to amend the draft text because it contains language such as sexual rights, reproductive rights that also mean abortion rights —  language that is not acceptable to them.

We deal with the opposition by reaching out to friendly countries and also by countering their arguments with facts and rights-based language.

6. Could you talk a little bit about how young people’s sexual and reproductive rights will be shaped by the Post-2015 agenda?

Being an older person, I cannot speak on behalf of the young people. 🙂

Fifteen years after the MDGs, young people, especially those who are from the Global South, continue to face barriers in realizing their SRHR. They still face humiliation, they are subjected to emotional and physical abuse, and they are denied their right to health and bodily autonomy. A majority still do not have access to comprehensive SRH information and services.

The Post-2015 Agenda should recognize the SRHR of young people to ensure that there is  universal access to youth-friendly SRH information and services, as well as comprehensive sexuality education that is gender sensitive, non-discriminatory and life-skills based, in a manner consistent with the evolving capacity of adolescents and young people.

7. As a regional network, what have been some of your concerns in South Asia and South East Asia? How do you think that the Post-2015 agenda will help your advocacy?

Sexual and gender-based violence is pervasive and it constitutes an extreme violation of women’s and girls’ human rights in the region. People across the region continue to face execution, imprisonment, torture, violence and discrimination due to their real or perceived sexual orientation and gender identity. Harmful traditional practices such as FGM and cutting, and child, early, and forced marriage persist and these violations often lead to early and unwanted pregnancies. Across the region, the barriers to comprehensive sexuality education and sexual and reproductive health services, including access to safe and legal abortion, hinder the realization of SRHR.

We need to monitor the governments’ commitments to the Post-2015 agenda and their future actions to hold them accountable to women and girls’ SRHR. WGNRR insists that when states fail to recognize full sexual rights and reproductive rights, they not only compromise women’s health, they both tolerate and endorse institutional and structural violence towards women and girls, abusing their human rights and perpetuating their marginalization and social exclusion.