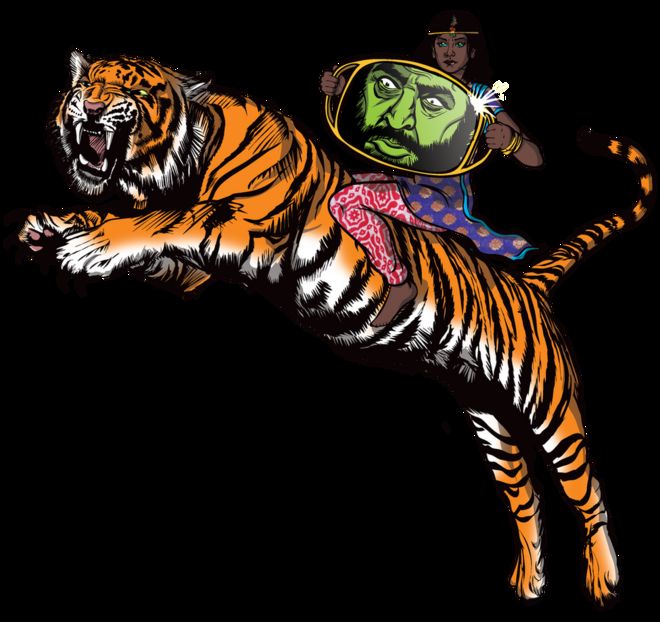 Priya’s Shakti, the first book about the character, was launched two years ago. Inspired by Hindu mythological tales, it told the story of Priya, a young gang rape survivor, who fought against sexual violence in India.

The new comic – Priya’s Mirror – focuses attention on acid attacks in India and around the world.

It features stories of acid attack survivors from New York City, Bogota, and Delhi, Indian-American filmmaker Ram Devineni, one of its creators, told the BBC.

“The reason I chose this subject is because there’s a clear co-relation between rape and acid attacks. The patriarchy, the social stigma and the attitude towards victims are the same in both. In fact, I think the lack of empathy for acid attack survivors is ten times more because their scars are visible,” he says.

Thousands of women in India, Pakistan, Bangladesh, Colombia and Africa are scarred for life in acid attacks every year and the perpetrators are almost always men, driven by an urge for revenge, mostly over unrequited love.

Acid, Mr Devineni says, is a “more dangerous weapon” than most others because it’s a “very deceptive” weapon.

“It’s a clear liquid which looks non-threatening and it’s so easy to get that even the perpetrators sometimes don’t realise the havoc it can wreak on the victims.”

The 36-page comic will be unveiled at the New York Film Festival at Lincoln Center later in the week (from 30 September to 6 October). It will be available in five languages – English, Hindi, Portuguese, Spanish and Italian – and can be downloaded free from their website.

“It’s a perfect way to educate them on issues of gender violence, to tell them how devastating this liquid weapon is.”

In the book, Priya (which means love) rides on the back of her ferocious tiger Sahas (courage) into “The Castle” to confront the villainous Ahankar (Ego or Arrogance), a demon disguised as a benevolent man, and liberate the acid attack victims who are trapped there.

Paromita Vohra, who co-authored Priya’s Mirror with Mr Devineni, says Priya’s weapon is rather unusual. Called the “mirror of love” Priya encourages the women to peek into it and look beyond their scars, to see what they were once, like singers, carpenters and painters.

The first Priya book was inspired by the murderous gang rape of a 23-year-old student on a bus in the capital, Delhi, in December 2012. After massive global outrage, India tightened laws dealing with gender crimes, including the introduction of the death penalty.

But law can only punish, there’s so much more that needs to be changed, especially attitudes, since acid attacks are rooted in patriarchal gender identities, says Ms Vohra.

“We need complex discussions around these issues, discussions that will help change mindsets.

“The language of crime is always the same. You read about the victim and the perpetrator, but we need to think of these people as more than victims, their indomitable characters, their courage, their beauty and struggle to remake their lives.”

And we need a fresh look at the villain since he is also a product of patriarchy, she says.

“When a woman spurns a man, his ego is hurt and when that ego is put through the acid of patriarchal thinking, it corrodes society. So he’s a villain, but he’s a victim too. And we have to start looking at villains and victims differently if we want to be able to change the patriarchal mindsets.”

Dan Goldman, the artist behind the comic, says he looked at pictures of survivors from across the globe before he began drawing, and similarities with some real-life women are easy to spot.

“It was about striking a fine balance, I tried to do it with a delicate hand, not to shy away from the reality, but they are real people. And the idea was to look at their spirit, that’s what they see in the mirror of love,” he told the BBC on the phone from Los Angeles.

Having spent time in South America and Brazil, Mr Goldman says he was aware of the problem of acid attacks, but found the scale “very very shocking”.

“I knew it happened a lot, especially in Colombia. But I didn’t realise it was so unbelievably prevalent.”

In the US, he says, few are aware of acid attacks. “You can’t buy acid in a corner shop here and whenever I discussed the issue with anyone, the first question was always, ‘But where do you get it from?’ The ease with which you can get it in India and some other countries is shocking.”

After a spate of acid attacks in recent years, the Indian Supreme Court ordered the government to regulate the sale of acid.

But the chemical remains easily available – a weapon of abuse in the hands of those bent upon ruining lives, corroding futures and extinguishing dreams.

So can Priya hold a mirror to the society? Can the mirror of love liberate the survivors?

Monica Singh, a New York-based fashion designer and acid attack survivor, says a mirror is the most potent weapon in the fight against acid attacks.

A major character in Priya’s Mirror, she was just 19 when she was doused with acid for refusing a marriage proposal, and she says looking at her scarred face in the mirror for the first time was the toughest thing she ever had to do.

Ms Singh, who runs a foundation to help acid attack survivors, says the comic will focus attention on the issue – it will help its young audiences understand the impact of acid attacks on the victims and, hopefully, act as a deterrent.