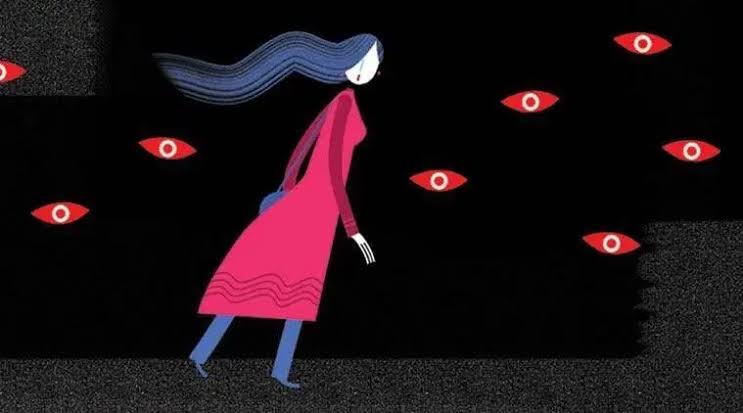 Recently, the Hyderabad police issued an advisory to women, listing preventive measures they should take while travelling. The notice was issued in light of the rape and murder of a 26-year-old veterinarian in the outskirts of Hyderabad reported on November 27. In this notice for ensuring women’s safety in public spaces, women themselves have been told to keep friends and family informed about their travel details, including location, whenever possible. Women have also been asked to share contact details of the mode of transport, and the number plate and drivers’ information. Furthermore, women have been advised to get to know the route before travelling anywhere and to always place themselves in ‘crowded’ and ‘illuminated’ areas. Finally, there is a reminder to dial 100, the emergency police helpline, whenever necessary and download the Hyderabad police’s Hawk Eye app. And in case everything else fails, there is one last ominous word of advice.

“If you are in a helpless situation, please shout and run towards a crowded area.”

Rage falls short in the face of something so absurd. The criticism against this thoughtless and ill-advised ‘advisory’ has been swift and emphatic, both in online and offline spaces. But its language and intent are neither new nor one-offs. They replay the familiar and interconnected tropes of protection, women’s safety, and construction of public spaces as sites of risk and danger.

And so, at the cost of repeating what feminist activists have pointed out on several occasions already, here is a reminder of why the existing language of ‘women’s safety’ in India is problematic, and the ways in which we may reframe it.

1. Don’t Put The Onus On Women

All 14 points in this advisory point in one direction—they put the onus of safety squarely back on women. Women have to keep their bodies away from possible danger zones, namely dimly-lit or sparsely-crowded spaces. Women must never let their guard down, always walk around in a state of hyper-vigilance, perpetually ready to ring alarm bells.

As if we do not already call up our friends or family and keep them on the phone every time we travel late at night. As if we do not already avoid dark and deserted lanes. As if every second of every day is not spent meticulously planning what to wear, where to go, how long to stay out, all in an effort to not be raped.

The only thing this language achieves (and maybe it is also the goal), is to create enough panic so that women themselves police and restrict their own mobility and whereabouts, and keep themselves away from public spaces whenever possible.

Women in most South Asian cities do not have unconditional access to public space. In ‘Why Loiter: Women and Risk on Mumbai Streets’, authors Shilpa Phadke, Sameera Khan and Shilpa Ranade point out that even in Mumbai, purportedly India’s ‘safest’ city, women “feel compelled to demonstrate at any given time that they have legitimate reason to be where they are.” That they have to “strategise, consciously or unconsciously, to negotiate public space.” And so, the authors suggest making public spaces safe and accessible rather than keeping women safe, the latter always a metaphor for control.

This could be through a combination of better public transport, street lights, helplines that actually work, law enforcement that actually shows up, and does not obsess over why someone was out late and what she/they were wearing. This was also one of the key recommendations of the Justice Verma Committee Report in 2013—made a year after the Delhi gang-rape and murder—which proposed street lighting on all roads, 24-hour public transport, an increase in the number of police booths and kiosks, and gender-sensitive policing. However, six years later, we are back to asking women to avoid dimly lit and sparsely inhabited areas.

3. Lose The Language Of ‘Protection’

There is a difference between ensuring women’s safety and the language of ‘protection’. This language of protection is not restricted to only paternalistic ‘Beti Bachao’ schemes, advisories and recommendations, but permeates our everyday vocabulary. It is the language families use to justify monitoring women, to urge daughters, wives and sisters to get back home at a ‘reasonable’ hour from the ‘dangerous outside’. It speaks through a vocabulary of care but its sexism and misogyny are barely concealed.

It becomes an easy excuse to scrutinise everything from a woman’s clothing to her sexual choices. It reinforces women’s bodies as the markers of family honour. It stereotypes women as eternal victims whose bodies and movements are then caught in a vicious circle of protection, surveillance and control.

Conversations on women in public spaces assume a neutral woman without considering how gender intersects with class, caste, sexuality, age, (dis)ability to produce particular exclusions or compulsions. The ability to call a friend, hail a cab, run from a helpless situation, remove oneself from dimly lit or less crowded areas is not available to all even if our policies pretend otherwise. Implicitly, the subject of public safety is the upper/middle-class, upper caste, able-bodied, cisgender, heterosexual, Hindu woman.

To an extent, the Delhi government’s move to make public transport free for women who cannot afford to pay is the starting point of an intersectional policy that makes public space more accessible. In contrast, the recently passed Transgender Persons (Protection of Rights) Bill, 2019—which awards six months to two years imprisonment for sexual offences against Trans people versus up to seven years in the case of cisgender women—is a reminder that, even within the legal mechanism, safety has a hierarchy in which some groups are prioritised over others.

The allusion to dimly-lit and deserted areas is also a veiled reminder that there exists a good woman-bad woman dichotomy in conversations on public safety. Safety can only be claimed by ‘good’, ‘respectable’ women who do not deliberately hang around in such spaces, but only happen to pass by.

The authors of ‘Why Loiter’ make an interesting observation on this dichotomy. In their discussion of Maharashtra’s 2005 ban on dance bars, they show how public space, safety and protection are articulated differently for ‘women in bars’ and ‘bar women’. Bar women made public space unsafe and therefore had to be banned in the interest of ‘women in bars’ who were passing by, whose privilege (or respectability) enabled legitimate claims to safety.

During discussions of the rape and murder of the veterinarian in the Rajya Sabha, Member of Parliament Jaya Bachchan unreservedly advocated lynching as a form of justice in ‘extreme’ cases of sexual violence. Earlier, the hashtag #NoMercyForRapists picked up on India Twitter with posts describing in minute and violent detail how the accused in the case should be treated. At the time of writing this, all four accused were reportedly killed in a police encounter.

There is not enough space here to go into a discussion on the fallacies of retributive justice, but suffice to say that the myth of violent punishment as a deterrence to violent crimes has long been debunked. And yet, it keeps coming back. It is easy to pretend that by subjecting perpetrators to violent forms of state-sponsored retributive justice, we will have somehow put an end to a deep-rooted sexist culture. It is harder to acknowledge that the routinised, normalised, ‘boys will be boys’ garden-variety sexism is the starting point of sexual violence. No doubt, those who rape and murder ought to be punished, but advocating the death penalty and lynching is facetiousness cloaked in righteous anger. It buries the discussion even before it has started.

Sexual violence and assault are about much more than a matter of women’s safety in public spaces. This is just one of a series of overlapping structural issues that we need to simultaneously address. But even this one conversation will have no meaning unless we get past a vocabulary that first normalises everyday sexism, then asks women to keep themselves safe, then handpicks who deserves to be safe, and when the veneer of women’s safety is predictably shattered, advocates death penalty and lynching as a solution.

Originally published on Feminism in India