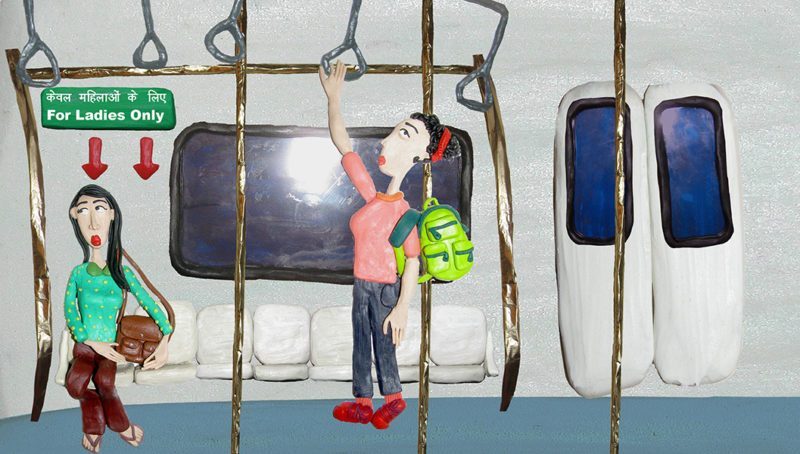 Today, I displaced a man from a ‘For Ladies Only’ seat in the metro. Everyone stared hard, some giggled. I was the feminazi, the misuser of women’s seats, the reason feminism has achieved its goals and should now be abandoned, the slut, the bechare aadmi ko utha diya (made the poor man stand), the auraton bohot samajhne lagi hain khud ko (women have started thinking too highly of themselves), the Madam ko chain nahi hai (madam has no chill), the khud to lipstick lagaake raat mein nikal rahi hai bechara aadmi office se thaka aa raha tha (look at her going out to have fun at night in a lipstick, while the man is returning from a hard day’s work), and much more.

I didn’t do it as soon as I entered. I had already surveyed with my eyes that in all women’s seats currently, men have rested their entitled asses and it isn’t as if there were no women in the compartment. It was a loaded bogey, at the peak 6:30 PM, and many women stood right in front of these seats.

I surveyed for long. The man on one of the seats saw me and looked away. Strugglng with a heavy bag, and high period pain, I decided to do it. Just as I raised a foot to walk in the direction, a number of questions washed over me. What if he is really really tired? What will he think of me while I do it? What will he think of me when he has to stand right in front of me? Will he curse me internally? Will he also go home and curse me to his wife? Will he curse me while sleeping and decide this is why women’s movements are wrong? What about the people I have to walk past? What about the shameful ‘excuse me’ when they realise they made way for a feminazi? What about the uncle sitting right next to me in another woman’s seat? Will he stand up too? Will he be ashamed? Am I responsible for his shame?

Then the counter answers rushed in. You need this seat. There is no reason you shouldn’t have it. These seats were made for women, probably with the interest of menstruating women in mind. Menstruation or not, this seat almost has your name on the top. “For Ladies Only”. Remember the math you did when you first came to Delhi and saw a very few seats marked “For Ladies Only”. That if menstrual pain and discharge are for five days a month, it makes one-sixth of women, who itself is half the population, menstruating at any given time, so that calls for one-twelfth of the seats for women. And this criteria too is not completely fulfilled in the ratio of the seats, which is around 4 in 50 seats in one general compartment. It almost is, (so take note and don’t write it on a public platform, Aanchal), but one extra seat was needed to complete this which would have been mandatory if this was an official percentage. But it’s not. And these calculations is everything to us.

Then I addressed the elephant in the room of my mind that it doesn’t matter if one is menstruating or not, that this seat is for women, and that alone is the criteria. I do not need to prove my worth for the seat by any other fact than that I am a woman. I thought about how I excluded trans women from having the seat when I made that calculation and based the number of seats on it. Did the Government include trans women while making the calculation? I doubt it.

Then I shut everything down and say things, in my mind, but almost aloud, in a sorted manner: the women seats exist for higher accessibility and higher inclusion of all women, and as a gesture of invitation for women to the public spaces. To access public transport. It is to make more women visible on the public sphere so that other women feel welcomed, feel safe, to get out and use these modes of transport. It is also for safety. And along with all this, it is also for health concerns like pregnancy and menstruation.

I even thought of Rosa Parks.

That stubborn revolutionary who refused to get up. I thought of all those quote of strong women I read. One last time, I reminded myself I deserved this seat, and I turned in the direction and walked.

I had to walk between a talking couple and I knew they’d judge me. I said “excuse me”, walked past them and then never looked back to see the look on their faces. And then without a thought, I reached the destination and said loud and clear, “Woman’s seat”, which was  a gesture to say “give me the seat, because it is a woman’s seat and you are a man sitting on it.”

He wanted no further shame so he sat up without looking at me and I sat down. And that wasn’t the scary moment, what followed was. Until that moment I had my back to my audience, now I had my face to them. To sit and feel the eye balls and giggles of all the people in the compartment: lurking, judging. The couple too giggled, the woman of coursedid not ask for the woman’s seat next to me until three stations later when this man got up to leave (who gave me a long stare and a creepy smile, while I looked at him emotionless). The man whom I had displaced, stood right in front of me, his thigh touching mine, and occassionally giving me glances, stealing them when I looked at him, and on and on in a loop.

I didn’t have to feel these things, but I did. This burden was not mine. The very fact that I had a long conflict with myself, a journey of self-blame and self-care, the confusion, the alternating confidence and self-doubt, speaks volumes. In that sense, is this a victory? What was more important, the fact that I got the seat at last or that I thought long enough about it?

A few stations later the crowd thinned and there was no one standing, and a new crowd emerged. I felt relieved. All those who knew what I had done and are cursing me internally and are going to tell their wives and husbands why they saw today feminism has failed, had got down and new people with no history with me have boarded. I sighed. I smirked. I thought of writing about it.

Aanchal is a motivated, far-sighted, pro-dialogue, Ambedkarite feminist. She has dedicated her life to working on and looking through the lens of gender, caste, sexual violence, subjecthood and law. She can be followed on Facebook.

This article was originally published on Feminism in India.