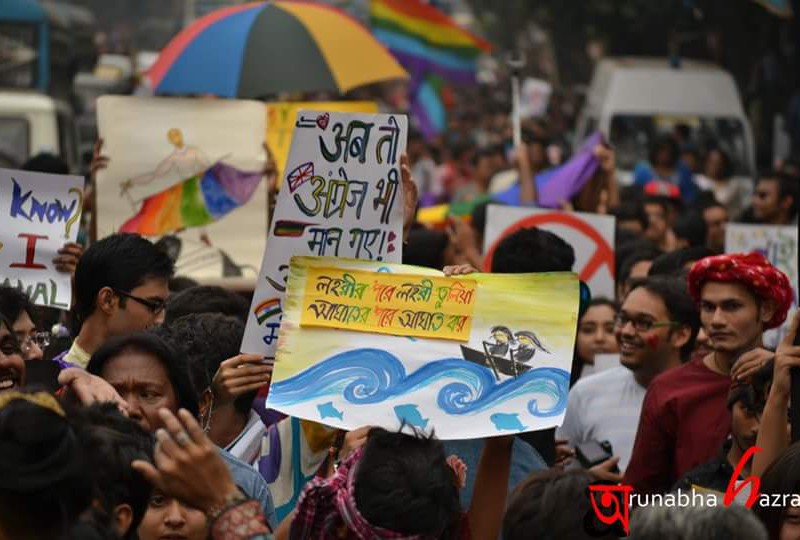 There are many ways to be queer. Apart from the fact that queerness encompasses a wide variety of sexual expression, it also fits into people’s identities to varying degrees. Sometimes it is at the very forefront of a person’s life, and at other times it may play a smaller (yet significant) role.

This diversity of expression and experience adds complexity to the process of queer community building. We often take for granted that creating community is a privilege and not necessarily something that happens on its own – oppressive institutions thrive off of isolating marginalised people.With the constantly looming threats of legal, physical and personal harm, queer community building in India is not easy.

And yet, there are visible efforts being made throughout the country to magnify the voices of queer Indians. The rise of Queer Pride events is one example of these efforts. These events represent a defiant expression of public joy by a community that is constantly denied the right to be seen and to take up space. By creating a platform where queer people can come together and actively assert their queerness, Pride events can be considered an integral part of queer community building: connecting people virtually, locally, and globally.

As Indian Queer Pride continues to grow, it is important to remember that queer Indians are not a monolithic community and that queer liberation will not be achieved in isolation. How, then, can Indian Pride events centre queer diversity, increase accessibility, and operate in solidarity with other movements of marginalised people?

Rahul Sen, a sexualities and queer politics researcher and “participant-observer” in the Kolkata and Delhi Pride marches, believes that the connection between Pride events and queer community building may be overstated: “The Pride parades, per se, do not contribute to the development of queer communities. If anything at all, the parades reveal the fractiousness of the queer community along the lines of caste, class, gender, politics and so on,” says Sen. “However, the organising of these Pride parades creates a sense of community where people of different affiliations come together to organise the walk, take up different responsibilities and work together.”

The “fractiousness” that Sen references is echoed by other Pride participants and organisers. Koninika Roy, Advocacy Manager at The Humsafar Trust, a Mumbai-based LGBTQ organisation, says, “I think that like any community, the queer community has its louder voices and voices that are lost in the bargain. Due to the sheer diversity of class, caste, gender, gender expression, religion, political leanings, (etc.,) it is often difficult to bring out a unified voice. For the LBT community, it has always been and continues to be difficult to navigate queer spaces and be heard.”

Representatives from the Kolkata Rainbow Pride Festival (KRPF) agree: “Pride parades in most countries had been mostly centred on gay-identified men in the earlier years. Further, it has always been projected as an upper-middle class, cis gender male initiative… But in our personal experience we have seen that the transgender community was the most visible from the beginning.” The focus on transgender women, kothis and hijras also seems to be the case in Kerala. Jijo Kuriakose, founder of the Malayali LGBTIQ organisation Queerala, says, “… the entire queer discourse is somehow stuck on transwomen’s lives after the Kerala state policy for transgender people was unveiled in 2015. Here it’s not only the lesbians who are invisible but also the concerns of transmen, homosexual men and bisexual people.”

This invisibility also extends to queer people who experience more than one type of oppression – disabled people, Dalits, Adivasis, and people from minority religions, among others. However, the fight for queer rights in India is inextricably linked to the struggles of other marginalised groups, and Pride organisers recognise the need to make space for these voices. “We understand that the queer rights movement does not exist in a vacuum. There are queer people who are Dalits, Adivasis, living with disability and so the oppression/marginalisation they face is doubled. … Pride parades cannot just be centred around queer rights but should include the voices of other marginalised communities too. The oppression we face is multi-layered, and by uniting our voices, the demand for human rights becomes stronger,” says the KRPF collective.

Kuriakose points out that the question of geographic and linguistic privilege should also be considered. “… the movement in the Hindi-speaking and Northern region has to be aware of happenings in the South too. Often, when the queer movement in India is represented on any global platform, it carries only the Mumbai or Delhi facets; this needs to change. The movement in the South is equally noteworthy!” And in order for queer issues to reach the mainstream, it seems that collaboration with other marginalised groups is essential. “I think that if marginalised communities in India are talked about in a queer march, it is better for the community because, eventually, to be accepted on a larger social stage we need to gain acceptance across these communities,” says Roy.

Is this collaboration and cross-movement dialogue happening on the ground? Are Indian Pride events making progress towards elevating the voices of queer people who are sometimes rendered invisible? The KRPF collective thinks so. “In recent years, more and more Pride walks are happening in towns and districts of West Bengal and the voice of lesbian, transgender, bisexual, asexual, pansexual, intersex, (and) gender queer people are being heard more and more. Pride parades in West Bengal are becoming more inclusive and are even joining hands with (the) women’s movement and (that of) people living with disability.” In addition, the organisers of the Kolkata Rainbow Pride Walk “try to provide the space for … dissent.” The community-funded walk encourages participants to make posters and other materials to highlight important issues during the event, and constructive feedback is welcomed.

Roy agrees that Pride is becoming more inclusive throughout the country. Inclusivity “is a fight, but it can be fought and it can be successful. One needs to come out in greater numbers and claim their space.” She adds that in January 2016, Mumbai’s Queer Azaadi March followed the example of Bangalore Pride and made their march accessible to people with disabilities. “… it was a lovely experience, thinking in an access-positive manner which also meant that queer PWD (people with disabilities) also joined the march and we are hoping for more such participation next year. It was a huge challenge designing communications, reaching out to people – but we were committed to it nonetheless.”

Sen cautions, however, against becoming complacent with queer intersectionality and inclusivity. “When, in 2015, Dalit queer activists in Delhi read out from their manifesto in the Delhi Queer Parade, many people accused the activists of diluting the cause of the parade. In 2016, when some of us carried posters of solidarity with Kashmir and Bastar in the Kolkata Queer Pride, there was an attempt to dissuade us from carrying those posters. For all the self-congratulatory talks on intersectionality, this is the state of queer politics in the Indian metropolis. However, amazing work on building intersectional communities is happening outside the metropolis in the smaller towns and districts.” Organisations like Madhya Banglar Sangram and Nadia Ranaghat Sampriti Society, for example, work with queer people from historically oppressed castes and classes outside major cities. They organise protests, meetings, workshops and more to raise awareness around the specific issues that queer people from Dalit and other marginalised backgrounds face. It is also important, Sen notes, to reflect on the ways in which attempts at inclusivity might not be accessible to all, and to integrate intersectionality into all aspects of the Indian queer rights movement. “… we cannot solely rely on invitations via email or WhatsApp (taking into consideration that not many people are on social media) or remember other marginalised communities just once in a year.”

Defining the Indian queer community and creating space for other movements and identities is an ongoing process that requires self-reflection on both an individual and structural level. Although there is always room for improvement, we cannot discount the importance of Indian Pride as it has grown over the past few decades. The KRPF collective explains the significance of Pride events: “Pride parades are … spaces where diversity is celebrated and confidence is built. Pride parades help people understand the history and necessity for a united queer movement to demand for human rights and dissent against oppression, stigma and violence. The reports of such Pride parades in the media helps many to open a dialogue with parents, friends, and siblings regarding gender and sexuality.” Kuriakose agrees, “Pride marches are one popular arena for various queer collectives and associated support groups to come together and raise their voices in a united manner, however politically varied the support groups might be. Each Pride is a hope for a better tomorrow.”

Thank you to everyone who contributed to this article.

Sonia Dhawan is on the Programmes team at TARSHI. She is interested in increasing accessibility to accurate information about sexual & reproductive health & rights and promoting cross-cultural dialogue between Indian and US feminist movements.