“Everything needed to be changed. Fortunately, we have already started”

A late chronicle: May 17 in Argentinean travesti and trans women voices

by Alejandra Sardá – Akahatá-Working Team on Sexualities and Genders

This is a late chronicle for several reasons. The obvious one is that it has already been more than 10 days since May 17, the International Day against Transphobia (and other wrongly called ‘phobias’ as they have nothing to do with personal pathologies but rather are social devices to preserve privileges). Another reason is that the writer of this chronicle is an activist who only now is again taking part in the activist movements in her country after having spent many years (and the best years for our country at very many levels, on top of that) far away.

In one of those overpowering rooms with polished wood and chandeliers that can only be reached through marble labyrinths, city MP Andrea Conde (FPV – Nuevo Encuentro, my party, an early confession to be made in case I sound too partial later) organized the roundtable Obstacles in access to rights for trans persons and travestis, an excellent opportunity to learn how Buenos Aires travestis and trans women (in spite of the title, there were no trans men at the table) are experiencing the neoliberal restoration in Argentina after 12 years of the Kirchner governments under which our country deservedly became a world leader with a 100% depathologizing/ depathologized Gender Identity Law and remarkable rates of access to education and work by trans persons.

We went from invitations to the Government House to be given our IDs to rubber bullets. – Gabriela Abreliano (Personas Trans Autoconvocadas)

The speakers at the roundtable were pretty diverse and soon after it started it was possible even for a ‘late-newcomer’ like me to perceive significant tensions between the speakers, and, between them and the audience. Nothing to be afraid of — this is how movements that are alive look like.

In the eyes of this onlooker, the differences were around two issues: prostitution vs sex work (a feminist classic debate) and who is to be credited (mainly) for the advances made in recent years. The agreements, even for the most critical speakers, were around the huge setback that  the current government has caused for their rights.

Let’s start with the agreements. Marcela Romero (ATTTA and Federación LGBT) said that they are in “a Trans alert” because of the arrests and police abuse that the community is facing once again, and particularly those of them who are doing sex work.

The arrests often lead to madeup drug-related charges. She also exposed the situation of the shortage of hormones available  for the treatments that fall under the Gender Identity Law and that the Ministry of Health – unfunded and lacking staff due to the “modernizing” lay-offs of the current administration – is now unable to provide. Daniela Ruiz, from Cooperativa Arte Trans, revealed the difficulties that her cooperative and many others are facing because the Central Bank has cancelled the special (no-fees) accounts through which they operated while subjecting them to a review, supposedly to distinguish between “genuine” cooperatives and others. In the meantime, the women working at the cooperative are back to street  work to survive.

The feminist classic sex work vs prostitution debate was played out in this context in a way that was different from what happens in cis feminist spaces. In the eyes of this narrator, cis feminists who have never engaged in sex work have a lot to learn from travestis and trans women. First of all: the respect. The accusations of ‘being pimps’, the screaming of insults and the physical violence I have often seen in feminist spaces were completely absent. I had a “Back to the Future” moment when Sabrina, from La Cámpora Diversa (whom I hope to live long enough to vote for as MP, Senator and why not something more than that), repeated the words of renowned trans activist Lohana Berkins ten years ago, when she and I together organized the Dialogue Prostitution-Sex Work: In the First Person Only: “The federal and provincial police will not ask us if we are abolitionists or we favour regulation – they take us away all the same. This is not a time for divisions”. Diana Aravena (Putos Peronistas) summarized travesti wisdom on this issue well: “If with that you pay for your stew, your room, and even manage to help your family, it’s fine. We don’t argue over prostitution vs sex work. What we want is everything, for all of us”. From the audience came voices saying, “I do not feel dishonoured being a sex worker” and “I am a sex worker, I don’t regret it”, and their abolitionist compañeras did not insult them. I apologize for the emphasis, but this is not what I am used to in cis feminist debates (in Argentina and elsewhere).

As for the advances made in these last few years, the scope went from the positions of Marcela Romero and Yahaira Falcón, who works at the City Public Defenders’ Office (“The State is yet to give me anything; it was the trans community that got us the Law”) to that of Marcela Tobaldi, from La Cámpora Diversa who works at the National Public Defenders’ Office: “Since 2003 a piece of me was resurrected everyday, I felt part of a collective project. Now with the Neoliberal model, the person is out of the picture”. From the audience Paula (another one I would like to vote for), displayed her ID saying, “My ID is the decision of a State that heard those who had never been heard before. It is the result of the political will of a President who included those who had never been included. And this is why people like me got into politics”.

With everything I have already paid the police as bribes, I could have retired already. – Marcela Romero (ATTTA – Federación LGBT) 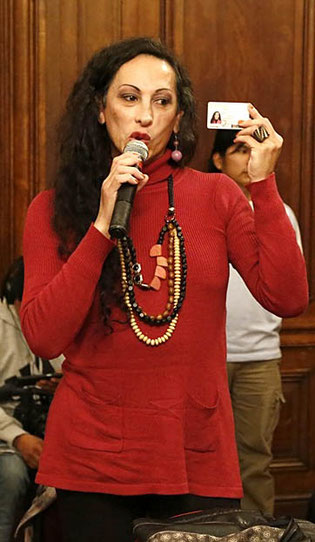 The title of this chronicle comes from something said by Victoria, who works at the National Bank and who also said that knowledge has given her freedom. Prospects for travestis and trans women are as hard as those for all of us, people apparently spoiled by the populist governments that got us accustomed to exercise our rights. But they are also more and less difficult for trans than for cis Argentineans. Why they are more difficult should be obvious: because they have inherited a history of exclusion and that legacy is in their bodies, like Diana Sacayán and Lohana Berkins – much remembered at this event, both of them victims of an untimely death like hundreds of others – knew only too well. Why they are less difficult is because one thing on which all of us, watching the Neoliberal and revengeful banquet with pain and outrage, agree is that from this brutal labyrinth we can only get out hand in hand, bound together. Sadly, we just seem unable to do it. What divides most cis-led social movements is still stronger than what binds us together.

But they – travestis and trans women (or trans persons, in general) have already proven, first by their survival and also in the process towards the Gender Identity Law, that they do know how to discriminate between what is important and what is secondary. Sabrina said: “We live in societies geared to bring up selfish individuals”.

They are lucky enough to be very “badly brought up” in this regard.

This article was originally published on the Akahatá website.
How do you like In Plainspeak? Got any suggestions for us? Let us know quick and easy with our survey.

We curate content from other portals to amplify discussion around sexuality and rights. All rights remain with the original sources. Corners and Videos are embedded links and Brushstrokes and Blogrolls are republished from open sources with a link back to the original source. Older links may no longer be available.

Read on: Recap of TARSHI activities in 2022

In Plainspeak publishes two issues with a theme every month. A cross-cutting theme across all issues is how we can expand safe, inclusive self-affirming spaces.