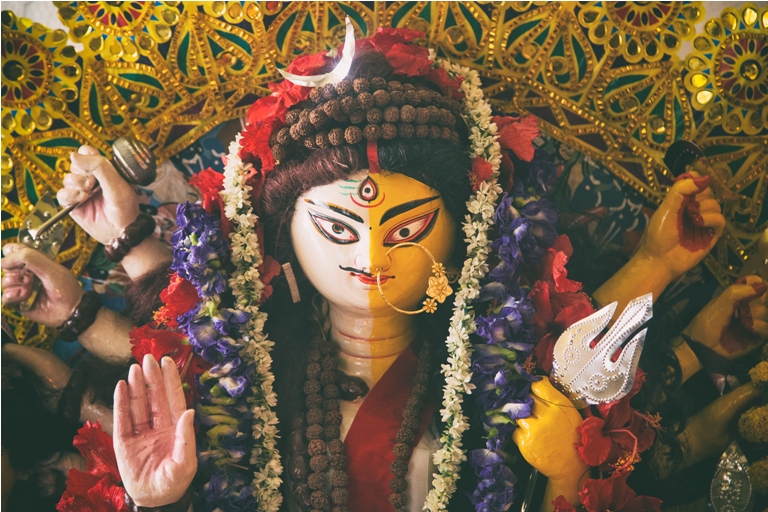 Roland Barthes in ‘Myth Today’ defines ‘myth’ as ‘a system of communication’, ‘a mode of signification’. He emphasises that this ‘mode of signification’ is not fixed –‘they can come into being, alter, disintegrate, disappear completely’. Myths do not convey meaning directly but in covert ways, and the process of signification in myths takes the meaning of symbols to the realm of association, and not denotation. Most importantly, myths naturalise, de-historicise and de-politicise all that is profoundly historical and political. But, by naturalising, myths often become comforting narratives of truth that sanctify that which is labelled or dismissed or criminalised as ‘unnatural’ in the modern world. One of the most intriguing mythological symbols in the Puranic-Agamic tradition in India is that of the Ardhanarishwara which has expanded in meaning when located in the realm of association with sex and sexuality in India. It is interesting to note how this fascinating image of Shiva and Shakti in fusion has found its way into political discourses of sex and sexuality, inaugurating a new mode of signification. The image, having found place within Kolkata’s Sharadotsav (another name for Durga Puja) has garnered newer meanings. Ardhanarishawara, (literally a deity who is half-man, half-woman) a divine image of androgyny, has transited through a changing realm of significations, whereby its fluidity and ambivalence as regards to gender and sexuality emerged as a powerful symbol which could be subscribed to in order to legitimise tritiya prakriti or ‘third gender’in India.What is interesting is how the iconography of the Ardhanarishwara finds parallels inother pagan cultures – Greek, Roman, Egyptian, etc. For instance: the Greek Hermaphroditos (united in one body with Salmacis, the nymph), and Agdistis (the Greek, Roman, Anatolian god having both male and female sexual organs). The Ardhanarishwara image, originating in the Kushan period, stands for the union of Purusha (the male principle of creation) and Prakriti (the female principle of creation). In both the Puranas as well as the Agamas, the Ardhanarishwara finds mention, and is known by several different names. The Ardhanarishwara Stotram written by Adi Shankara Bhagavatpada underlines how the principal creator is beyond sex or gender; it can even be neuter.The Shiva-Shakti union in the image of the Ardhanarishwara (apart from Kinnars, Jogappas, Aravanis) finds prominent place in the definition of tritiya prakriti or ‘third gender’ in the civil writ petition (NO.400 OF 2012) of the National Legal Services Authority (petitioner) versus Union of India and others (respondents). This writ petition liberally takes recourse to the epics, puranas and myths to consecrate the naturalness of transgender identities, which had been to a great extent de-naturalised during the hypermasculinist colonial period, whereby femininity-in-masculinity came to be perceived as ‘the final negation of a man’s political identity, a pathology more dangerous than femininity itself’ (Nandy 8). The criminalisation of transgender identities which severely marginalised the community was the bane of British colonialism, which not only delegitimised tritiya prakriti, but was also successful in breeding a deep aversion for the community in the popular consciousness. The writ petition, therefore, had to look back on a relatively more tolerant pre-colonial past and its mythologies in order to undo the damage done by colonial laws and the perception of tritiya prakriti they ensured. This writ petition, therefore, is a significant entry point of an apparently ahistorical/apolitical myth into the realm of political discourses on gender and sexuality.

The appropriation of the image of Ardhanarishwara in Kolkata’s Durga Puja can be traced back to 2015. This sarbojonin pujo (public puja), organised by an NGO working for kothi and transgender citizens, was first held in a neighbourhood of North Kolkata; in 2016, the Puja changed location, and was held in South Kolkata. After a gap of one year, in 2018, the Ardhanarishwara image returned in a bari’r pujo (a puja which is open to all but held privately inside a house) organised by the transgender activist Ranjita Sinha at her Gokhale Road home. 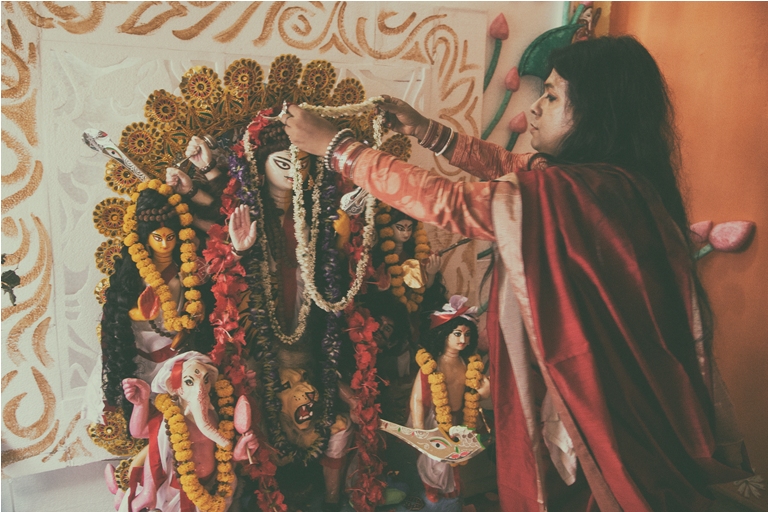 The last few years proved to be remarkably dramatic as regards to the progress of the LGBTIKHQ… movement in India, climaxing with the reading down of Sec. 377 of the IPC on 6 September 2018, roughly one month before the Durga Puja.  Before that in August 2018, the Cabinet had passed the reworked Transgender Persons (Protection of Rights) Bill with 27 amendments, following the protest from transgender communities across India about how the 2016 bill had failed them. The worship of the Ardhanarishwara, as one can see, was a celebration of the success the sexual minority community achieved after a very long battle against the state.

The replacement of the traditional Durga idol by that of the Ardhanarishwara, without any obdurate protest, highlights the true carnivalesque spirit of Kolkata’s most looked-forward-to festival. The ‘insertion’ of gender liminality, and, its sanctification, within a mainstream festival underscores the inclusivity that Durga Puja has always been known for. Mild criticism from left liberals who are not comfortable with imbuing LGBTIKHQ… activism with ‘religiosity’ did make its rounds; but, one may contend that view by pointing out that Durga Puja itself has transcended the boundaries of a particular religion and collapsed class and caste hierarchies as testified by mass participation, notwithstanding the shastras that are followed in the pujo rituals. In fact, the origin of the image of Durga has different histories, one being her tribal origin as Chamundeshwari who slaughtered the dark-skinned king of the tribal asura people. The appropriation of the Durga image during the colonial period and its emergence as a mass festival has another fascinating history. In fact, the origin of Durga Puja, by default, has no single monolithic discourse behind it. In other words, Durga Puja has always been open to appropriation, re-imagination and transformation, which is perhaps best exemplified by the artistic experiments witnessed in the imagination of the idol. Durga Puja, therefore, could effortlessly open up space for the inclusion of sexual minorities and their re-imagination of the Durga idol in terms of the Ardhanarishwara. In fact, in Sinha’s bari’r pujo, a further syncretism was noticed in the adoption of the Vaishnavite tradition of worship, the inclusion of a transman as priest, and the participation of members of the trans-community in the creation of the clay idol under the supervision of an expert from Kumortuli. This syncretism, as one may note, wrote a new story of gendering DurgaPuja, that dismantled sex and gender hierarchies in the concrete image of the Ardhanarishwara. This also attributed a new meaning to the carnival.

It is remarkable in the sense that sex and sexuality which have been kept away as ‘profane’ from a festival with religious overtones, despite its carnivalesque spirit and cosmopolitan expanse, find an unambiguous expression in the worship of the Ardhanarishwara. As delineated above, the symbolism and iconography associated with the image of the Ardhanarishwara, therefore, becomes a powerful reminder of how androgyny, gender liminality, and sexual fluidity, idolised in the union of Shiva and Shakti, is a reality which heteronormative society can no longer afford to ignore. The collapse of the man/woman binary, or for that matter, imagining sexuality only in terms of binary oppositions is signified in the image of the Ardhanarishwara. An apparently ahistorical myth, therefore, acquires unprecedented political currency. In fact, it may be worthwhile mentioning here that the ek-chala pratima, the predominant representation of Durga and her four children, has been often interpreted as a symbol of the happy joint family, a heteronormative one that goes without saying. 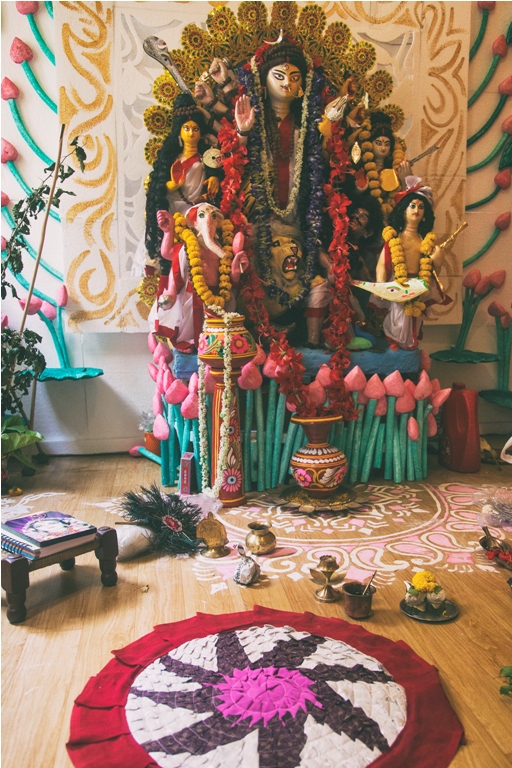 The Puja in progress

The replacement of the Durga idol by that of the Ardhanarishwara in the same ek-chala structure may suggest the possibility of forming and sustaining alternative kinship structures, not determined by biological connections. 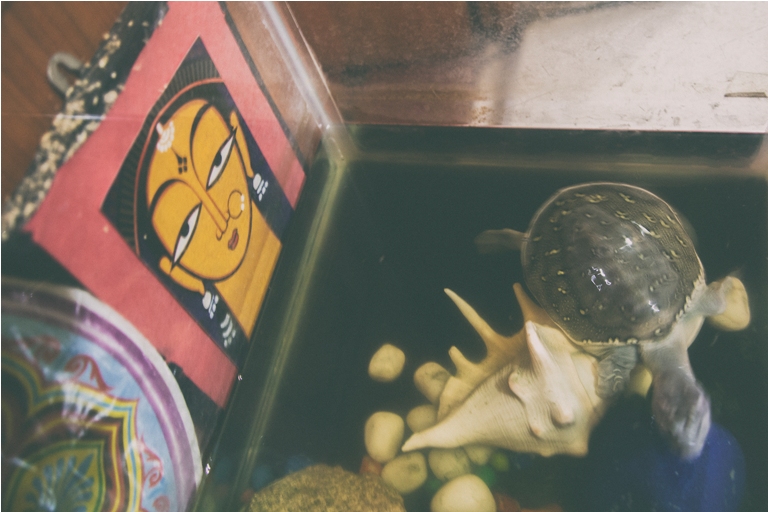 The photographer finds the turtle kept in an aquarium just outside the puja room significant in this context: the fact that the turtle is the symbol of the feminine principle that supports the masculine elephant that holds the world in Hindu mythology.

The ek-chala structure, worshipped by members of the queer community, connected by their identity and politics, challenges the heteronormative, biologically determined idea of the family. The worship of the Ardhanarishwara image, therefore, works symbolically on different levels, interpolating a mass festival with extremely powerful discourses of non-normativity.

Nandy, Ashis. ‘The Psychology of Colonialism’.The Intimate Enemy: Loss and Recovery of Self Under Colonialism. New Delhi: OUP, 1983. 1-63.

Kaustav Bakshi, specialising in postcolonial studies, gender and sexuality and popular culture, teaches at the Department of English, Jadavpur University. He has published in international journals such as Postcolonial Text, South Asian History and Culture, South Asian Review, New Cinema: Journal of Contemporary Film, etc. His latest published book is Rituparno Ghosh: Cinema, Gender, Art (Routledge, 2015), the first ever anthology showcasing original research papers on India’s most celebrated queer filmmaker. He is currently working on a volume on Queer Studies with Orient Blackswan and a co-edited anthology, Popular Cinema in Bengal: Stardom, Genre, Public Culture with Routledge. Arnab Adak is a photographer living in Kolkata, India, working on socio- documentary projects. The primary focus of his photography is to delineate various cultural, social and environmental concerns that need attention and raise awareness among the masses. His works cover gender issues, climate issues, caste issues and religious or social events that impose threat to humanity in the social platform.  He has studied mathematics and computer applications and is currently associated with a management consulting firm professionally. His works can be viewed at: https://www.arnabadak.com