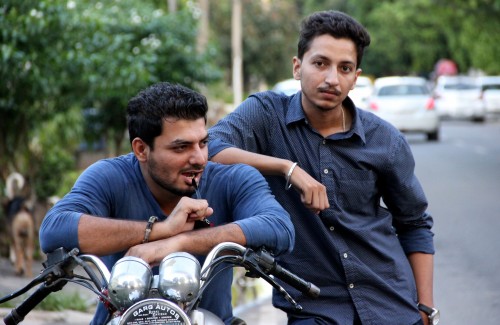 During a recent conversation with an American friend who is a self-professed feminist of the second-wave variety and hence regards all mainstream pornography and sex work as blanketed subjugation of women, she posed the following query, “Do you think it’s because the majority of porn readily available on the Internet today features white Western women that men in developing countries like India see a white Western woman traveling by herself and think she is fair game for sexual harassment and even rape?” Having been trained on a healthy diet of gender, queer and feminist theory that emerged in response to second-wave feminist thinking in the 1980s and 1990s, I retorted, “Well, white men raped and sexually subjugated Indian women at will throughout our colonial history, before the invention of the Internet and before pornography as an enterprise existed.”

Of course, one needs to look no further than the third-wave, post-colonial and transnational feminist scholarship (i.e. the writings of Gloria Anzaldúa, bell hooks, Cherríe Moraga, Audre Lorde, Gayle Ruben, Chandra Talpade Mohanty, Inderpal Grewal and Karen Caplen to list just a few) for more eloquent critiques of second-wave feminist thinking and the ways in which the second-wave feminists privileged women’s equality at the cost of overlooking inequalities confronting those who are marginalized based on racial, sexual, gender and colonial identities and subjectivities.

There is no doubt that the emergence of new forms of digital media technologies including smartphones has made it easier to access pornography and facilitate new sexual experiences in a manner not possible previously (Grindr, Tinder, WhatsApp, Snapchat, etc.). Under the current conditions of globalization vis-à-vis economic liberalization of Indian economy, circulations of information and media (explicit or otherwise) can no longer be controlled by one nation state or entity regardless of how unpalatable it might seem to our cultural sensibilities. The genie has already escaped the bottle and not even right-wing forces with all their verbose rhetoric and threats of censorship could contain it. It is no longer a matter of whether digital media technologies will transform our understanding of desire, intimacy and sexuality, but rather how and to what degree.

Increasingly, I encounter Indian feminists and activists who associate the availability of pornography with the increase in tendency among Indian men to enact sexual violence and rape, as my American friend suggested. And increasingly, I find myself defending Indian men along with their right to consume pornography. To assume a direct causality between circulation of pornography and the problem of sexual violence not only risks overlooking myriads of other factors that contribute to the prevalence of rape and violence against women, such logic also treats all men as devoid of agency and humanity, as rendered slaves to their penises. Despite a handful of high profile incidents of gang rapes that have recently brought worldwide attention to the issue of sexual violence against women in India, sexual violence against women and other gender minorities is a problem that predates the arrival of the Internet and circulation of pornography.  As feminists like Nivedita Menon have eloquently argued, the problem of sexual violence or gender-based violence has to do with the culture of impunity and victim-blaming pervasive throughout the Indian criminal justice system and Indian society.

Despite recent attention to issues related to sexual violence and gender inequality in India, a critical discussion of Indian masculinity remains absent from public discourse.  Discussion of rape and sexual violence remains fixed within the domain of women’s issues, without engaging men’s lives and experiences. Following feminist scholar bell hooks, if we expect the men in our lives to change and learn to be more loving, caring and equitable partners, brother, fathers, and sons, we must extend a similar sense of compassion and nuanced understanding to them that the feminist project demands of them. While second-wave feminists largely foreclosed such possibilities, third-wave feminist thinking along with queer and gender studies scholarships offers an entry into a dialogue about men’s lives that does not automatically reduce them into binary categories of either the ‘perpetrators’ of violence against women, or as ‘protectors’ of women’s ‘honour’. To cultivate healthy, supportive relationships with the men in our lives requires us to complicate our understanding of masculinity and how men learn to be men.

The process of learning to be a man is equally complex and can be as violent as learning to be women. Despite the popularity of pornography among Indian men, during my research I have encountered several young men who express feeling equally constrained by representations of heterosexual men in pornography and in other forms of popular media such as music videos and even Bollywood movies. While porn stars represent one extreme form of masculine behaviour, they are not fundamentally different from other representations of masculinity popular in our culture, which include movie stars like Salman Khan and hip hop musicians like Yo Yo Honey Singh. Within a patriarchal society, these representations define what Men’s Studies scholars refer to as ‘hegemonic masculinity’, understood as the type of practices embodied and enacted by men who are on the top of the social hierarchy, often in the interest of maintaining control over women and sexual and gender minorities. In talking to men, and asking them about their everyday lives, it becomes clear that very few men are hegemonically masculine, and the notion of the dominant, powerful, heterosexually oriented, successful, independent patriarchal man is more of an archetype found on TV, in movies or in pornography. These representations rarely reflect the lived experiences of men who regularly find themselves constrained by familial responsibilities, social roles, economic hardships, and sexual expectations.

Most heterosexual men fall into the category of ‘complicit masculinity’. While they might not actively engage in acts of dominance and subjugation of women, they benefit from the privileges and rewards that are associated with being a man in our society, and are complicit in keeping the patriarchal structure intact. Yet they pay a heavy price for their complicity and servitude to patriarchy. As sociologists and anthropologists studying masculinity have noted, in patriarchal cultures all around the world, official and unofficial rites of passages to becoming a man often involve emotional, physical and/or sexual violence and abuse.

In India, young men frequently deploy homophobic epithets like “chakka” [faggot] and “gaandu” [asshole] to police each other’s masculinity. Our society’s collective amnesia about prevalence of male rape and sexual assault within homosocial settings like military academies, boarding schools, and within local fraternities of men does more in turning young men into violent criminals than the kinkiest pornography available on the Internet. Not to forget that male-on-male sexual assault is a common feature of poor and working-class boyhood in India, as this form of violence becomes a way of regulating caste hierarchies. And it’s no secret that Indian armed forces use rape, specifically male rape as a tactic to subdue and pacify the population under their control. Men who are victims of sexual assault rarely receive the kind of support and acknowledgement available to (some) women. Instead, they are ridiculed and mocked, their manhood questioned, and they are regularly shunned into silence. The internalization of sexual violence with no sense of consequence or even acknowledgement of such violation in turn teaches victims to enact similar violence on others. This is not a uniquely Indian problem. The recent spate of mass shooting across the United States of America, where lone gunmen have embarked on senseless killing sprees in American schools are often directly related to the culture of hazing and the lack of critical focus and discussion about healthy masculinity and sexuality in North American society.

Men, regardless of where they are born, are never born dominant or violent. Learning to become a man or a woman involves a series of social processes and circumstances that produce a whole spectrum of gendered and sexual subjectivities. In my experience, the role pornography and other forms of visual media and popular culture plays in influencing male sexual development is relatively small compared to the multitude of other issues that deserve our attention such as the need to adequately address sexual violence, to offer comprehensive sexuality education, and to provide young boys with the kind of nurturance and emotional support that would ensure that they would grow up to be respectful, loving and kind men.

The irony of this global/Internet age is that that it bombards us with images and information without offering any tools to differentiate between what is knowledge and what is, for the lack of a better word, simply entertainment. A feminist approach would offer young men the tools to engage critically with popular representations of hegemonic masculinity by providing them with comprehensive sex-positive education. Offering young men the skills to be critical consumers of visual media accompanied by comprehensive sex-positive education will do a lot more to mitigate the unintended effects and feelings of inadequacy young men might experience while watching pornography or listening to Yo Yo Honey Singh’s music rather than trying to censor these representations, which time and again has proven to be ineffective.

Role of Honour by Amandeep Sandhu (2012)

The Mask You Live In by Jennifer Siebel Newsom (2015)

Harjant Gill is an associate professor of anthropology at Towson University. His research examines the intersections of masculinity, modernity, transnational migration and popular culture in India. Gill is also an award-winning filmmaker and has made several ethnographic films, including Mardistan/Macholand, that have screened at international film festivals and on television channels worldwide including BBC, Doordarshan (Indian National TV) and PBS. Funded by the Performing Arts fellowship by American Institute of Indian Studies (AIIS) and the Fulbright-Nehru Research Award, Gill is currently living in New Delhi while developing an eight-part immersive virtual reality web-series on Indian masculinities titled “Tales from Macholand.” His website is HarjantGill.com.