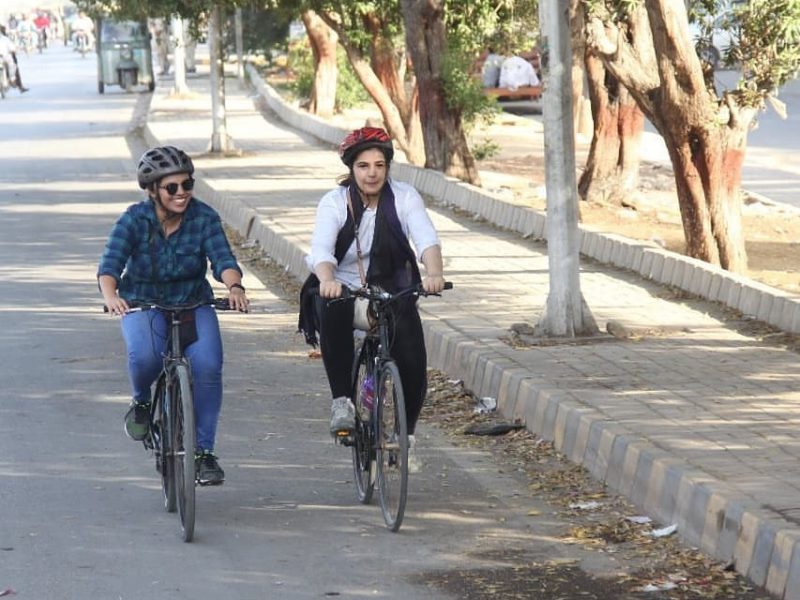 Women’s mobility, and the gender segregation of public and private spaces, has been a central concern of South Asian feminism for a long, long time. Within the urban sphere, feminist discourse has for the past few decades centred on the constant anxiety and anticipation of violence, which permeates all of women’s movements within South Asian cities. However, something unusual is happening to that discourse in this cultural moment. Feminists are systematically and strategically shifting their attention from the anticipation of violence to the active search for pleasure in public space. Separate but connected feminist projects have sprung up in Cochin (Kiss of Love), Bangalore (BLANK NOISE), Karachi (Girls at Dhabas), Delhi (Pinjra Tod & Hidden Pockets), and Mumbai (Why Loiter?). They say, don’t petition the government or powerful organisations to make our cities safer for us – instead, simply go out and claim the city that is already yours, on your own terms, to do things as mundane as have a cup of chai at a dhaba (a roadside eatery), or spend an hour chatting at a street corner.

Is it unsafe? Perhaps. Does it matter? No. Because it’s not enough to agitate for a safer, more accessible city in the future. We want to experience the pleasure of travelling the city in the now, without shame. Therefore, we need to oppose the laboriously secretive nature of how we usually claim pleasure, by making that pursuit intentional and public – and so, we document it with pictures, hashtags, blogs. The work of these groups is radical because it constructs women as embodied individuals who want to have fun. Our bodies exist not to be covered, made small and invisible, but to be explicitly purposeful while we’re out in public: they exist for us to experience pleasure in them – the pleasure of dancing in public, our hair whipping around in the breeze while in an auto, taking a long walk on a cool summer night. We have as much of a right to lafangebaazi (bumming around) as men.

Nevertheless, it doesn’t escape notice that these movements are explicitly concerned with urban space. Other people, I am sure, can better analyse the lack of representation of rural women in this type of ‘mainstream’ feminist concern. We need to have this conversation. I am, however, a woman living in Delhi; I have never seen or lived much of India outside it. From my situated perspective, what I want to start a conversation about is how these movements also tend to lean towards perceiving the radicality of living, travelling, experiencing pleasure, as a woman, from a particularly upper-class urban embodied perspective.

In the book Why Loiter?, a text which comprehensively thinks through and proposes this new praxis of activism, Shilpa Phadke, Shilpa Ranade, and Sameera Khan state how the anxieties around women in public space are particularly centred on the violability of middle-class women’s bodies – what they call the “Neutral Woman” (23). Certainly, this seems true; it also seems to be the assumption many women’s movements in the subcontinent function on, including the ones mentioned in this article. However, what “middle-class” is, is not defined. Indeed, the “middle-class” woman is contrasted against the “upper-class” woman, the woman who comes from “the seriously wealthy business families” (125). Is this really the case, though? In comparative terms, with our staggering income inequality, what we colloquially call “middle-class” might actually be “upper-class”. This is an important differentiation because “middle-class” is a very murky term in our society and the use of it in Why Loiter? makes it hard to understand what is being proposed if one is looking at it from a lens of class and gender. Middle-class is associated with various narratives about morality – e.g. good middle-class girls shouldn’t be out at night, or working-class men are always looking to defile good middle-class girls (which is a bit Brahmanical also) – so it makes sense why they would want to focus on this narrative, but the difference between middle-class and upper-class is not defined, which is really important for an argument like this, because all those narratives also apply to everyone else who THINKS they are middle-class. As such, a basic assumption of the study becomes problematic, because when the authors say they are centring the middle-class woman as the subject of their analysis and proposed praxis, could they actually be centring rich women, as feminism in India has done for the past few decades?

The authors further argue that in order to claim our rights as citizens (in the very literal sense of the term), upper-class women need to reject the ostensible pleasure to be found in “privatized public spaces” – that is, malls, coffee shops, restaurants, clubs – and claim the pleasure to be found in truly public spaces like parks, footpaths, and to an extent, places like chai and juice shops and dhabas. Putting these ideas into practice are groups like Girls at Dhabas, with chapters across Pakistan, and BLANK NOISE, which started in Bangalore and now has “Action Heroes” all over India.

BLANK NOISE organises campaigns to counter street harassment by, among other things, asserting women’s rights to be in public space and not be harassed. One of their campaigns is #MeetToSleep, which calls on women to come to public places and take a nap – much like we often see working-class men doing. The argument is that men are not policed for this behaviour, whereas a woman lying about alone in public space is an easy target for harassment.

Girls at Dhabas (GaD) encourages young South Asian women to claim space at dhabas and take selfies documenting their excursions. It started organically, with one selfiehashtagged #girlsatdhaba, which gained a lot of traction. Its founders started a movement on the basis of the idea that women were never seen at dhabas – partly because of “dhaba patriarchy”, i.e. dhabas being men-only spaces, and partly because of the narrative that public areas, especially areas populated by working-class men, are highly unsafe for women, particularly upper-class women.

An issue that often comes up with these campaigns is their largely upper-class participation; GaD have responded to this critique by, among other things, raising funds for a dhaba that will be for women, the khwajasira community, and other marginalized genders, and will offer jobs to working-class women and khwajasiras. It’s good that GaD is being visibly accountable to their audience. However, I think it’s important to extend this class-based critique into a discussion of how urban space is occupied and contested not only on the basis of gender, but also class.