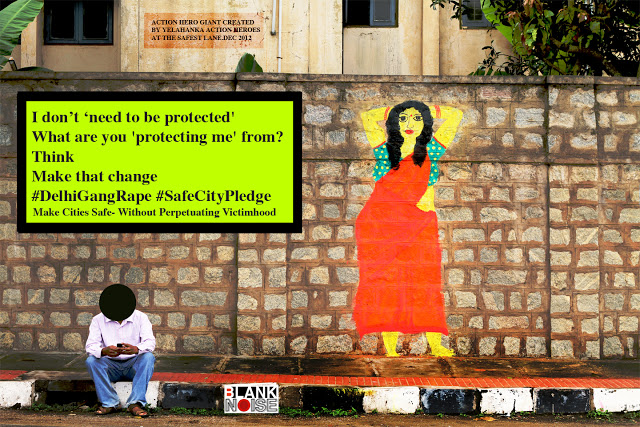 The rape and murder of a young woman in New Delhi on December 16, 2012, left the Indian public consciousness shocked and it simultaneously propelled a social and cultural search to understand the problem of sexual violence, especially against girls and women. In the aftermath of this case, large-scale public protests and movements took place; politicians, lawyers, women’s rights activists, and an independent government-appointed commission made proposals for new laws, police reforms, and public education on violence prevention. Many people, and artists in particular, found different mediums and forms to express their views – whether outrage or searching for reasons or making suggestions for positive change.

As someone who was surrounded by the sounds of music at home from my early childhood and with a parent who worked in rural education programmes, forming connections between art and (social) change wasn’t too difficult, albeit extremely challenging to explain to many other people who didn’t necessarily see the power that art has to deliver a message or be used as a tool for change. If fact this inspired my sister, Faith Gonsalves, and me to begin a music for social change initiative in New Delhi, Music Basti. With the idea of ‘art and activism’, this issue of TARSHI’s blog is centered on a few noteworthy projects combining art forms and issues related to gender and violence, sometimes an easier and perhaps even more palatable way for artists and audiences to approach subjects that might be difficult to express opinions about or change with only direct intervention or policy revisions.

Over the past two years, we’ve seen a more visible burgeoning of arts-based projects and initiatives, some more overtly in response to the violence against women being reported. I’ll begin with an inspiring musical set up I recently came across in New Delhi, ‘Friends of Linger’, a group of amateur singers who collaborate with different professional musicians playing with them and writing and singing about issues including gay rights, role of women, wealth creation and crony capitalism, and even love. “To us, while some of the lines we sing may disrupt or disturb sections of society, we do believe that if we don’t address them, that sense of peace for those who are left out or pushed aside, will never be a reality” says Sharif Rangnekar, the founder of Friends of Linger. Right now they are working on a piece about abuse of a section of society that has been marginalised through the Indian caste system. Funds they raise through their project will go towards the Naz Foundation (an organization that works on issues of HIV and AIDS in India). Another new project, a bit more ‘off the beaten track’, is a stereotype debunking photo campaign called ‘Breaking Stereotypes’ by the match-making website, TrulyMadly.Com, based on conversations with youth across New Delhi.

Some more programmes and events that have gained some prominence include a recently organized campaign, ‘Jurrat’, by Majma, an organization with a vision to create and promote music, films, theatre and other cultural forms challenging hierarchies of class, caste, patriarchy and issues of gender-based violence, and was organized in association with Swaang, a Mumbai based protest music band. Jurrat was a weeklong event that featured prominent figures like Vrinda Grover and performances including ‘Be careful’, a sketch enactment by Mallika Taneja and the Play ‘Museum… a dying species’ by Being Association and directed by Rasika Agashe. Supriya Chotani, a founder member of Majma said, “We are engaging with these issues however through a range of cultural forms such as poetry, protest music, street and stage plays, poster exhibitions and installations, as we think these have a powerful resonance.”

Some theatre-based responses have included Mallika Taneja’s Thoda Dhyan Se (Be Careful) to the 2012 Delhi and 2013 Mumbai rape cases which asks the questions of who to blame and who is responsible for sexual harassment. “The advice that women should dress carefully not to invite rape rings hollow. I knew my time to talk came (sic)” said Mallika in an interview. Her 10-minute monologue sketch showcases her in the act of layering up, and has been performed in various parts of Delhi. You can see photos of Mallika’s sketch here. Dancer-director Maya Krishna Rao’s ‘Walk’, a solo performance, another response to December 16, has been performed in various parts of the world; and the play ‘Nirbhaya’, inspired by the 2012 Delhi case, which debuted at the 2013 Edinburgh Fringe Festival by South African playwright Yael Farber tells the stories of six women’s experiences of sexual violence.

A few older significant projects that combined art and media forms include Bangalore-based ‘Blank Noise’ that began in 2003 as a volunteer-run public art project that seeks to confront and begin public dialogue on street harassment and the large-scale ‘Bell Bajao!’ media campaign that began in 2008, that took a step towards foregrounding men and boys as partners, actors and leaders in the fight against violence against women. Bell Bajao! is a cultural, organising and media campaign strategy that calls on men and boys to join efforts to end violence against women.

A great performance piece is Pramada Menon’s standup comedy act ‘Fat, Feminist and Free’ that she began in 2007. The act, which emerged organically from incidents in Pramada’s own life, highlights suggestions from other people around her body, health and views on gender and sexuality. Pramada says, “I like performing. I like the fact that there is an audience that is actually listening to me. My show may or may not alter perspectives, but it forces participants to think. The stories I put out are about my lived realities in the fields of sexuality, gender, body politics, women’s rights, and organizational politics. If any message is conveyed, great; if not, people come to laugh and they do that and go away.”

As someone who is also trying to find my voice on this issue, and who is searching for more meaningful ways to engage, art is sometimes a means that offers a way for a voice and a perspective to be amplified and made accessible. Some of these projects might be part-time, after office-hours ways to make your voice heard or contribute while some others may be an all-encompassing and full-time work. These are just a few very encouraging examples of projects in India that explore complex issues of gender and violence through not just personal expression, but also through attempts to shift our attention to the systemic and political systems on the one hand, and individual behaviors and attitudes about these issues on the other.

This article has been republished from our July 1st, 2014 issue.

She works in the area of health and arts. She heads research for Agenda 1 in New Delhi, a research project working to identify the root causes normalizing issues of abuse and violence against children and adolescents and leads Institutional Advancement at Global Music Institute (GMI). She is also the co-founder of Music Basti and has worked with organizations including UNICEF, Mirada Medical and the International Institute for Sustainable Development (IISD). She studied population health at the University of Oxford.