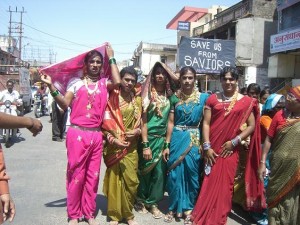 Introduction: As this first-person account of Anita, a Devadasi in Maharashtra, Western India illustrates, issues of consent and violence/coercion cannot always be clearly demarcated as black and white. Anita’s account shows that there were definite instances of coercion in her life and equally, there were spaces where she was able to exercise her choice and consent too.

I grew up in Gokul Nagar (a shanty town colony of women in prostitution, or dhanda – business). When I was little, customers would come to our house and I would take their bicycles for a long ride…and I played hide and seek (lappa chappi).

When I was 10, I found out that my mother was a sex worker. One of my mother’s regular clients supported my sisters and me economically. My mother died around that time. My father (the person who lived with us as my mother’s malak (long-term lover, like a common-law husband) came at least two or three times to meet us after my mother’s death. We were living with my aunt. She was the only person who took care of us. My sister told me that I should become a Devadasi. I didn’t know about the Devadasi system.

As a girl I was always having fun. I used to wander all over the place. I spent the whole day playing with other girls in my community – Shairi, Sumitri, Kamli, Mhadi, Afsana – all my childhood friends with whom I happily spent my day. They were all my age. Most of the days I got into trouble with my mother while playing. I used to get spankings but it didn’t stop my fun.

My mother admitted me to school very late, so I was one of the older students in my class. When I was in 4th grade, I got my period and because I was now mature I left school. I never missed going to school.

When I was dedicated to the Goddess Yellamma, my aunt (who I call my mother) asked me to go to Saundatti (one of the oldest towns in Belgaum district in the Indian state of Karnataka) with her. There were three or four women from Swarup Talkies area who came along with us. First we went to the Temple of Jogul Bai Satyawwa. They told me to have bath and had me wear leaves from the Limb (Neem) tree. After worshipping the Goddess there, we went to the main Temple on the mountain. The women with me brought many special food ingredients like dal [lentils], rice, flour, and they made a meal. Paradi, a plate of foods for the Goddess was prepared. In the evening, in the presence of five other Devadasis, I became a Devadasi. They put five strings of pearls around my neck and from then on, I was a Devadasi. I was 12 years old then. It was a religious thing for me – like for other Devadasis.

I never thought anything much of becoming a Devadasi. In my family, my mother, my aunt, my sister and many of my relatives were Devadasis. I didn’t feel bad when I became one. I never wanted to get married.

When I turned 18, I entered sex work. I didn’t know anything. Once a man came to our house and said “I will be with you this evening”. My friends told me “Look, this man is going to come sleep with you. You will hold hands”. I put mehendi (henna designs for special occasions) on both of my hands. He came in the evening and sat on the bed. My friends told me to go and sit next to him. They said, “He will not do anything to you”. So I went inside and sat beside him. Then he started to hold me but I felt uncomfortable and I shouted, so he left me alone. I was interested in hanging out outside with my girl friends. I was not interested in doing sex work. After three or four months the same man came to our house and called me. This time he demanded sex. I found out then that “going inside” means to have sex with someone or to “sleep with someone.”

A good day was when I had a lot of clients visiting me, when the money was flowing my way. I could earn a lot of money. Tuesday was also a nice day because it was a fasting day spent worshipping the Goddess. A day without clients was a bad day for me. I would blame myself for not having many clients.

No man ever hurt me in my whole life. At one point this guy came around and tried to act like my husband (malak), but I wasn’t fond of him and I fought to keep him away from me. I became stronger by fighting with him.

Meena Seshu madam was the first person I met from SANGRAM. She came to visit our community with Appravva mousi (honorific term meaning aunt). Meena Seshu madam introduced us to condom distribution in our community. She gave us information on HIV and AIDS and STIs and selected me as a Peer Educator for the community. In those days there was a high prevalence of STIs among the women. The implementation of this program made a huge difference in our lives. We learnt the importance of condoms and started using them. Initially Nirodh (a brand of condoms) was introduced by some clients, especially those who were married. They were the ones who brought condoms but most of the unmarried men didn’t know much or didn’t carry condoms with them.

Once I started to use condoms with clients, I felt good. Some men were resistant but I would tell them about HIV and STI infections. Even though many of them refused to use condoms at first, I would negotiate with them and require them to use it.

Once, I felt that I was in love. I planned to run away with him and went up to Market Yard in Sangli. I stopped there for a while and thought about my family and my future. I came back. A malak is different from a client. With a malak, we love each other mutually. And with clients, I work for money. With a malak, I go out to have fun. I did this with clients too but my heart wasn’t in it. And that’s the difference between a malak and a client.

I wanted to have a baby with my malak. So that’s why I had unprotected sex with him. I spent my free time during the days with my malak and got pregnant. During my pregnancy test I realized I was also HIV positive. I was so upset. I was so sad on that day and I cried a lot. The community women and [Meena] madam counseled me. This happened four years ago. It is through their support that I am alive today.

I gave birth to a baby girl in the civil hospital via Cesarean. I didn’t know about her illness. She was fine for two months. I stayed in the civil hospital for more than a month and a half, because of the operation during the delivery. My baby was so sweet. But after two months, I lost my baby. I felt so sad. I felt like it was all in vain that I suffered so much with the surgery and the pain. I had a child with great difficulty, and then I lost her. Many people from SANGRAM and VAMP – Veshya Anyay Mukti Parishad – the Collective of Sex workers Against Injustice  supported me socially and economically.

I feel VAMP works for women like me. I wanted to do the same work for others so I joined the peer educator work. I feel very good that I work for other women. My work helps in building capacities of both myself and other people.

When I found out I was HIV positive, I started convincing other sex workers to use condoms to protect themselves from STIs and HIV. Initially, many of the women chose not to listen. But I continued to meet with them and advocated for condom use. Now, they listen to me and believe me because I have a similar background.

I am not convincing women to leave their dhanda, because it is our livelihood. I am only enforcing the use of condoms to save their lives. I feel each and every woman in the community has the power to tackle any issue related to sex work.

Whenever my hands are full of money I am happiest, and on festive days (holidays), when my family members are happy, when my health is good, these are the moments I am happiest in life.

Today, I hope to live a healthy life and be wealthy forever*.

* [Editor’s Note: Our heartfelt condolences on the loss of Anita, who passed away on January 21, 2014]

Anita is an outreach worker with Vesya Anyay Mukti Parishad (VAMP) in Maharashtra.