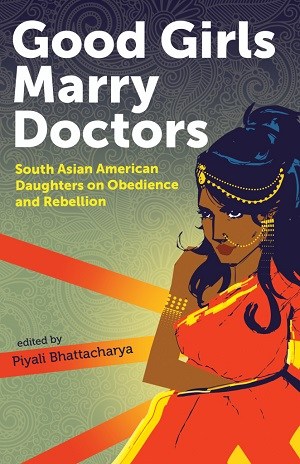 For some young women, this safe path feels comfortable and natural. It earns you the approving gaze of your parents and all those aunties and uncles, and it’s a near-certain path to financial security and family stability. I can’t fault anyone for choosing this tried-and-true path.

But some of us daughters just can’t stay buckled in on this Disney train to the fairy-tale princess castle. We free spirits need to go off track. We want to be activists and organizers hollering in the streets for social justice. We want to be writers and editors challenging conventional wisdom through the written word. We want to be artists and actors bringing beauty and joy to people’s lives.

And then there’s love, dating, sex, and marriage. Forget about being straight, much less gay — you’re not even allowed to be a sexual being (until you’re married). What to do then when your brown-skinned self connects so perfectly with that brown-haired young man you met while organizing an anti-racism lecture series? And what do you say when all the aunties want to introduce you to eligible bachelors (but it’s actually women you’re attracted to)?

For all the “Bad Girls” out there — the ones who rebel (or are seeking to rebel) against the Good Girl path — you’re not alone. Good Girls Marry Doctors: South Asian American Daughters on Obedience and Rebellion, edited by Piyali Bhattacharya, is a collection of essays written by a surprisingly diverse array of daughters who didn’t follow the Good Girl path. As Bhattacharya writes:

At some point in time, each of us was on the precipice of Good Girldom, petrified of what might happen if we chose to jump off the edge. But none of these thoughts were as daunting as the thought of walking through our lives, for decades on end, in shoes that didn’t fit.

Jumping into the unknown is scary, and Bhattacharya writes, “[This] is the book we wish we’d had when we were going through our darkest moments.”

To every South Asian American daughter who feels torn between Good Girl and Bad Girl, East and West, home life and public life, read this book — now. If you know a young female who might be facing these issues, give her this book as a back-to-school gift, a birthday gift, a graduation gift, or a whatever-the-reason gift.

The daughters contributing to this book are inspiringly brave.

The daughters contributing to this book are inspiringly brave. They tell deeply intimate stories of the constant tension of wanting to be obedient daughters to their sacrificing parents while still following their own inner voice. One writer’s mother told her over and over, “We have sacrificed so much for you children, and you are so bloody ungrrrrateful.” To which the writer asked herself,

Was the price of being an immigrant’s daughter perpetual obedience and lack of control over my life? What if I wasn’t willing to pay that price?

These courageous women candidly write about taboo topics such as premarital sex, coming out, domestic violence, and eating disorders. One writes:

I lost my virginity a few miles away from my parents’ house. I cried that afternoon. I knew I had lost something that could not be recovered, some child-self, some precious girlhood. But after that, sex was a powerful force. I had found something that belonged just to me, just to him. I had discovered pleasure. Sex was a way of saying, I choose America.

We know that the act of making our rebellions public may feel tragic to our parents. But we hope they understand that in doing so, we are not trying to hurt them or expose them to judgment. We are trying instead to take a positive step forward — to build a safe space for people who have been through similar experiences.

Many readers of South Asian heritage will likely see in this book echoes of their own experiences, when the values and norms stressed at home are incongruent with the values and norms stressed outside the home. One woman reflects on her life at age 17: “In my school life, I am in my senior year and being asked to cast votes for ‘cutest couple.’” Meanwhile, she’s having this exchange with her father:

‘You are too young for dating.’

‘My friends have been dating since they were 12.’

‘Your friends are Canadian.’

‘I am Canadian,’ I laugh through my tears.

Not everyone has complete discord with their parents, though, and there are heartwarming stories of parental acceptance when daughters don’t follow the expected path. Jyothi Natarajan and her partner, Anand, had a “non-wedding” party because they didn’t believe politically in the institution of marriage. Her queer sister, Vani, met a white trans man in 2012. While the two sisters and their partners were visiting their parents, Jyothi’s mother says, “So, now that both you and Vani are not getting married but are living with partners … I want to get you something.” Jyothi wonders what’s going on. Mom explains: “You won’t get any wedding gifts. … So I want to get each of you a Vitamix.” Yes, the $450 Vitamix 5200 blender — apparently the maternal stamp of approval on your relationship.

What surprised me most — but probably shouldn’t have — was the diversity of experiences.

What surprised me most — but probably shouldn’t have — was the diversity of experiences. The daughters whose families have struggled with money, breaking the stereotype of the financially secure South Asian American family. The daughter whose parents separated after 30 years of marriage and eventually divorced. The daughter whose parents didn’t flinch at all when she decided not to go to college straight out of high school and chose instead to pursue an opportunity to work as a singer.

These moving essays on sensitive topics provide hope and inspiration for those South Asian American daughters on the precipice of Good Girldom. Jumping is not easy. But other daughters have gone before you — and they have not just survived but have come out stronger. These are their stories.

Note from the editors: Earlier this week, Piyali Bhattacharya joined contributors Swati Khurana, Rajpreet Heir, Jyothi Natarajan, Ankita Rao, and Sejal Shah, to discuss their new anthology at the Asian American Writers’ Workshop in New York, NY. Here’s a sample of tweets and photos from AAWW and others. Check out #GGMD on Twitter and the @aawwtimeline for more.

.@PiyaliWrites: Our conversation isn’t limited to the book! South Asian women & others: contribute your stories to https://t.co/OfzFGXSBBL!

#goodgirlsmarrydoctors event @aaww just started, but already @PiyaliWriteshas the room weepy. (Or me, at least!) pic.twitter.com/Kln1NqPdQT

.@PiyaliWrites: This book feels like a betrayal to our parents. But I hope our love for them shows through on this book’s pages. #GGMD

.@swatikhurana recounting her struggles as a family supporter, a mother, and ultimately a daughter #GGMD pic.twitter.com/DvDp18IUKz

.@anrao on being discouraged from expressing her feelings growing up, even amidst an eating disorder #GGMD pic.twitter.com/gyx81LiBLq

This article was originally published in The Aerogram and is written by Preeti Aroon.