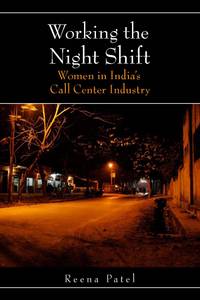 The book ‘Working the Night Shift: Women in India’s Call Center Industry’describes the different spatial and temporal conditions that are put on women who want to occupy public spaces while working for new labour markets in the country.The book has been authored by Reena Patel who is a feminist scholar and geographer. She has been researching on the issue of working women, their safety and mobility related concerns for more than ten years. The book is based on the ethnographic study she did on the call centre industry in India and it was conducted in three cities offering new customer services-Mumbai, Ahmedabad and Bengaluru. Patel conducted seventy two interviews with female employees,their family members,the call centre supervisors and documentary film makers. The process also included four focus group discussions at the call centre sites.

The major points of discussion in the book involve feminist reflections on what constitutes women’s work, its nature as well as the mobility and morality narratives for women in the country. She starts with talking about how the new type of labour markets that have formed post globalisation and liberalisation in India have allowed women to participate and work in unconventional work atmospheres. This had resulted in better wages and benefits for the women workers. Also this has sort of increased the visibility of these women in the public domain and this is being done by overcoming restrictions previously imposed on women’s mobility. Thus, in a way,opening up new spaces for them where they can renegotiate their identities.

Interestingly, the author poses certain pertinent questions which highlight the contradictory aspects of this so-called increased economic power. These new markets actually originate in foreign countries and are outsourced to developing countries that offer cheap labour.She questions how truly empowering the economic freedom for these women is. The jobs and the income the women earn have not yet translated into a paradigm shift of the existing gender roles and norms in their home front. Women workers still have to take care of dual responsibilities at their home and workplace. Not only that, there is a creation of new challenges these women workers have to face in terms of restrictions and controls.

In a patriarchal society like India, women are expected to justify a purpose for being outside after a certain hour. The call centre work makes these women vulnerable to abuse and violence. In a way,their safety becomes a point of concern for their employers and family members and translates into paternalistic restriction and control for the women. An example of this would be the fact that these women workers are segregated from the rest of the men and women who occupy the night space, through availability of company cabs.Their reputation and respectability is therefore preserved by distinguishing them from women who maybe soliciting at this hour. Also these women employees face many informal constraints suchthe constant surveillance by society with respect to their behaviour and movements.This manifests in the form of gossip about their character and sexuality and in turn leads to discrimination which they face in the ‘marriage market’. In a way,women workers have to renegotiate the spaces offered to them in unique ways. Patel tries to show how class and caste issues of respectability and reputation are attached to a woman’s body and mobility.

In short,the book describes how there has not been any real change in the socio-cultural structure that would question patriarchal norms and the gender roles expected of these women and how economic opportunities might not necessarily lead to true empowerment for them. The call centre work can be seen as enabling the growth of these women as well as controlling them in other ways which might not be visible on the surface.

The one thing the book does not do is that it does not seem to engage in a meaningful dialogue with existing works on women’s labour in the new markets. One does not get a clear idea of where exactly this book is situated in terms of knowledge production and what are the solutions to the issues Patel raises in the book. Even then, it is a good read as it explores a lot of concepts about mobility, sexuality and gender in an easy to understand manner.