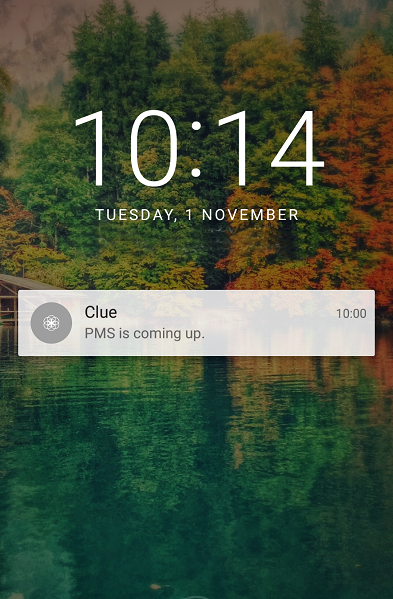 Just this morning, I got an alert on my phone from an app with a grey icon that brims with seriousness; in a no-nonsense way, it announced:

PMS is coming up.

When I got this message last month, I was amused. It seemed to explain my rage at something that wouldn’t have triggered so much anger on other days. I guiltily accepted the explanation, because I’ve always been conflicted about treating my period as a (thankfully) minor nuisance that comes in my way or as a painful biological function that saps my energy and requires sympathetic attention. I’m aware that not everyone breezes through their period, but I’ve never been able to confidently say that periods don’t stop women from doing anything.

This conflict is perhaps why I have an awkward, uncomfortable relationship with period-tracking apps as well. Looking for something that helps me stay on top of my expected period dates, I tried finding new apps several times on Google Play. I’d often turn away in disgust looking at apps that featured an excess of flowers, pink and purple. My period isn’t flowery, and seeing pink and purple associated with anything to do with women annoys me no end.

And then I read a friend’s Tweet on Clue, which she said helped her understand her cycle better by giving her a heads-up about upcoming PMS, among other things. Intrigued, I downloaded the app and loved its straightforward design and the fact that it didn’t need me to sign up. Although I was confused as to why it collected data on everything from my body’s food cravings to cervical fluid type to hair and skin quality, emotions, sexual activity and social behaviour for the day, I was interested when it said that the data collected would be shared with researchers to better understand women’s health.

I religiously fed data in for a few days on every category, eventually losing steam, wondering how all this data was going to help me. Over time, I began to only record the starting date of my period. It seems I’m not alone: a Scroll.in article by Zinnia Ray Chaudhuri quotes several women who are puzzled by the variety of data such apps require, and who resort to using them only to track estimated dates for the next period, their fertility window, etc. The author, however, believes that this response to these apps shows how little women are taught about their bodies – all because we don’t know how to categorise cervical fluid or track ovulation dates based on the last period. This extrapolation by the author surprised me. What made them sure that knowing this information about our bodies and the supposed ‘normals’ they were linked with, were relevant to Indian women? The author has also alluded to similar tracking apps that are used by men to track the cycles of women around them – partners and colleagues – so that they know when these women are likely to be ‘sensitive’ or prone to get upset. That such apps exist, and are used by men, got me enraged (and for good reason, I believe).

I was not amused that the author, who has acknowledged the potential pitfalls with information quantification of this kind (All it could take for a man to dismiss a genuine problem raised by a female colleague is, “I know she’s PMSing, my app told me!”), believes that Indian women’s reluctance to use such apps as anything more than a period tracking device is a reflection of how little we know about our bodies. While no one denies the secrecy and stigma around menstrual health in the country, these apps are no panacea for the problem, coming as they do with serious risks centred around self-reported data collation.

These apps come in at a time when there is unprecedented interest in self-quantification, perhaps set in motion by the Fitbit activity tracker craze (and I’m guilty of partaking in this too). My degrees in communication and social sciences and my few years of working in public relations have led me to question the veracity of ‘science’ and ‘data’ in accurately describing or measuring anything. Most recently, I handed my mother my Fitbit, confident that in her activities all day long – in the kitchen, in the garden, her caretaking of my aged grandfather, her tuition lessons for kids, etc. – she would easily cross the Fitbit recommendation of 10,000 steps a day for a healthy heart. Imagine my surprise when after an especially busy day the tracker only showed 6,000 odd steps! The hundreds of times she walked from one corner of the kitchen to the other seemed to have not been recorded. This baffling inaccuracy is another reason I regard data collection with skepticism.

Buttressing my skepticism, I came across an interesting paper in the ARROW for Change journal, titled Quantifying Fertility and Reproduction through Mobile Apps: A Critical Overview. Having looked at many apps[1] that track periods, fertility, ovulation and pregnancy, authors Vanessa Rizk and Dalia Othman from the Tactical Technology Collective say, “The amount of data and metadata collected by these applications has allowed for the quantification of women’s bodies on a scale not evident anywhere before.”

Of particular concern to the authors is that these apps don’t just collect and store data, but share them with ‘invisible third parties’, often medical clinics and research centres, Clue being a prime example. The authors question the implicit assumption that these researchers know what to do with the data and what output it results in. They are also concerned about how the data from these apps are contributing to creating a ‘normal’ standard of healthy menstrual cycles that was primarily based on data from women who used the app – most likely American and European white women who had access, were bothered enough, and knew how to use them.

Deep down, this paper leads you to wonder about the obsession with tracking women’s bodies in the name of science. As the authors put it,“… that knowledge about women’s bodies belongs to science is a problematic idea, one that instrumentalises women’s bodies, and that has an unfortunately long history.”

In an environment where there are multiple layers between technology and women’s access to it – education levels, caste, class, status in the household – tracking apps do very little to reduce women’s illiteracy about their bodies. The data collected could set you dizzy with worry when one of your indicators doesn’t match with the ‘normal’; they could lull you into complacency that everything is fine with your menstrual health when you could be in dire need of some intervention; a simple prompt of “Your period seems to be late” could send thousands of women hunting for a pregnancy test (in a world where many young women think kissing could lead to pregnancy, imagine the panic that such a prompt could cause!)

This isn’t to dismiss period tracking apps and their utility in the larger movement for better health for women and the acknowledgment of their bodies and their needs. But in an ideal world, women would have more control over how their data are used, and the awareness that any ‘trends’ based on such data need to be read with caution. This level of understanding requires not just information about one’s own bodily functions, but an added layer of nuance that questions the supposed infallibility of data and science. How far away from this ideal are we?

Read also: The (Pseudo) Science of Not Trusting Women With Their Bodies

Images are courtesy of the author.